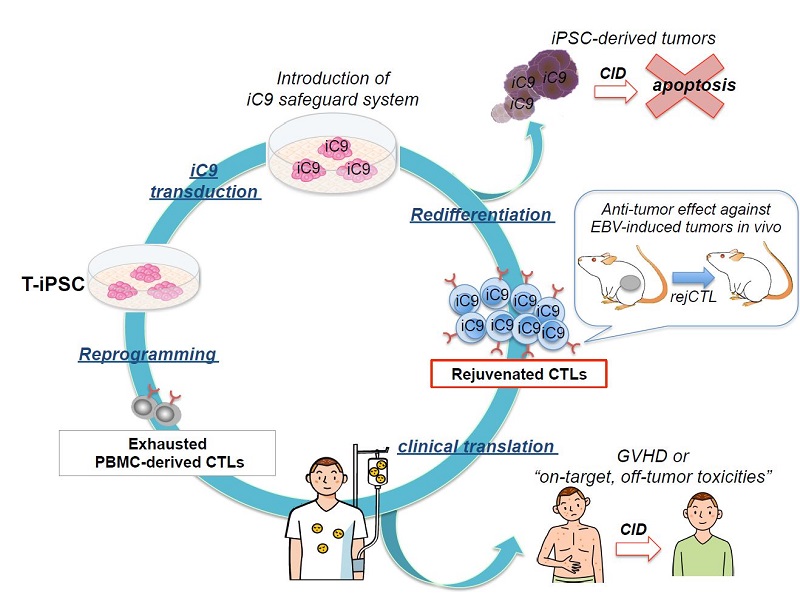 Conceptual diagram of iPSC-derived rejuvenated T-cell therapy with iCaspase9 suicide gene safeguard system
iPS cell technology is applied to create T-iPS cells from killer T-cells, a type of immune cell. These T-iPS cells are produced using the patient's own T-cells and the T-cells derived from them are able to target only specific viruses. A suicide gene iCaspase9 (iC9) is introduced into the T-iPS cells, which then re-differentiate to killer T-cells able to attack only specific virus.
© 2015 Miki Ando.

Researchers at the University of Tokyo showed that human immune T-cells rejuvenated using iPS cell techniques effectively reduced the size of tumors in mice, enhancing the safety of iPSC-derived T-cell therapy for eradicating target viruses by including a suicide gene in iPSC-derived T-cells that can be pharmaceutically triggered. This finding will accelerate research towards realizing clinical applications of this therapy.

In 2013, Professor Hiromitsu Nakauchi’s research group at the University of Tokyo Institute of Medical Science’s Division of Stem Cell Therapy successfully developed a technique to produce killer T-cells, a type of immune cell, in a rejuvenated state from iPS cells. However, before this technique could be used safely in clinical settings, it was necessary to develop techniques to control the iPS cells in case they became cancerous or produced other side effects.

This time, the same group has experimentally demonstrated that rejuvenated killer T-cells effectively reduce tumor size both in mice and in vitro (in the test tube). In addition, they introduced a gene, iCaspase-9, into the iPS cells from which they then produced the rejuvenated killer T-cells. iCaspase-9 induces cell suicide. Compared to ordinary T-cells, these iPSC-derived T-cells were more effective at reducing the size of a tumor implanted into a mouse, and also extended the survival time of the mouse. Further, the research group confirmed that by administering a specific drug that induced cell death in the iPSC-derived T-cells it was possible to erase these T-cells in mice and demonstrating that if side effects were to appear in therapeutic use, it would be possible to eradicate the iPSC-derived T-cells.

This research provides a means of completely controlling any side effects that might occur as a result of T-cell therapy, greatly advancing the possibility of safe and effective T-cell therapies. Speaking of his group’s latest research, Professor Nakauchi says “This safety mechanism can also be applied to other iPSC-derived therapies.”

The Institute of Medical Science