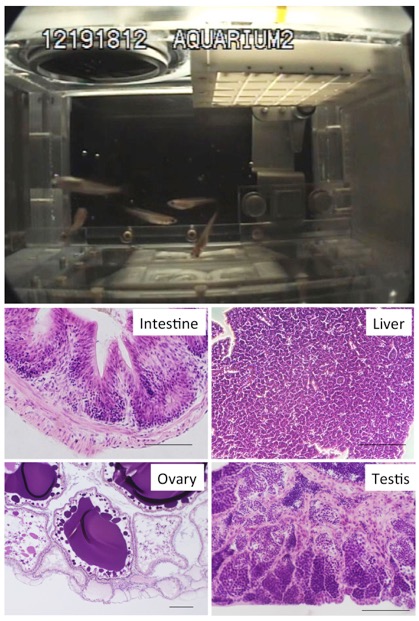 A University of Tokyo joint research group analyzed gene expression of medaka cultured in the International Space Station Kibo module for two months and found alteration in several signaling pathways related to stress responses in most organs. These results suggested that common stress responses occurs in space environment in both fish in an aqueous environment and mammals.

Remaining in space for a long duration is know to cause a variety of physical and mental stresses on the human body. Realization of longer-term space exploration to the Moon or Mars will require overcoming these problems. The medaka space experiment (Medaka Osteoclast) was carried out by the research group of Professor Akira Kudo of Tokyo Institute of Technology in 2012 to study bone metabolism during a two-month space stay using 16 medaka larvae as model astronauts in an aquatic animal experimental device developed by JAXA. This research showed that bone-destroying cells were activated and bone loss was observed in medaka just as in human astronauts. However, the effect on gene expression in the organs of these fish larvae remained unknown.

In this latest research, the group of Professor Hiroshi Mitani of the University of Tokyo and his Japanese collaborators exhaustively analyzed the onset of gene expression of six organs (brain, eyes, liver, intestine, testis, ovary) of the medaka from the earlier experiment. Clear changes were observed in gene expression in the intestine, testis and ovary in the space environment. On the other hand, alteration in gene expression was small in the brain and the eyes. Moreover, ten genes were found to show changes in expression across many organs in the space environment. Several of these common genes are reported to be involved with immunity and oxidative stress in humans, suggesting the commonality of the stress responses between medaka and human during adaptation to the space environment. While they examined immature medaka larvae grown in space, further space experiments using medaka are under consideration to analyze the gene expression of medaka born in space and the impact on gene expression in their offspring after their return to Earth.

“This was the first large-scale experiment to compare genetic expression in the organs of medaka grown in space,” says Professor Mitani. He continues, “These experiments are expected to reveal the biological and physiological effect of the space environment on animals and their adaptation mechanisms. These experiments using model animals will lead to the development of techniques to enable astronauts to remain in space for long durations in good health.