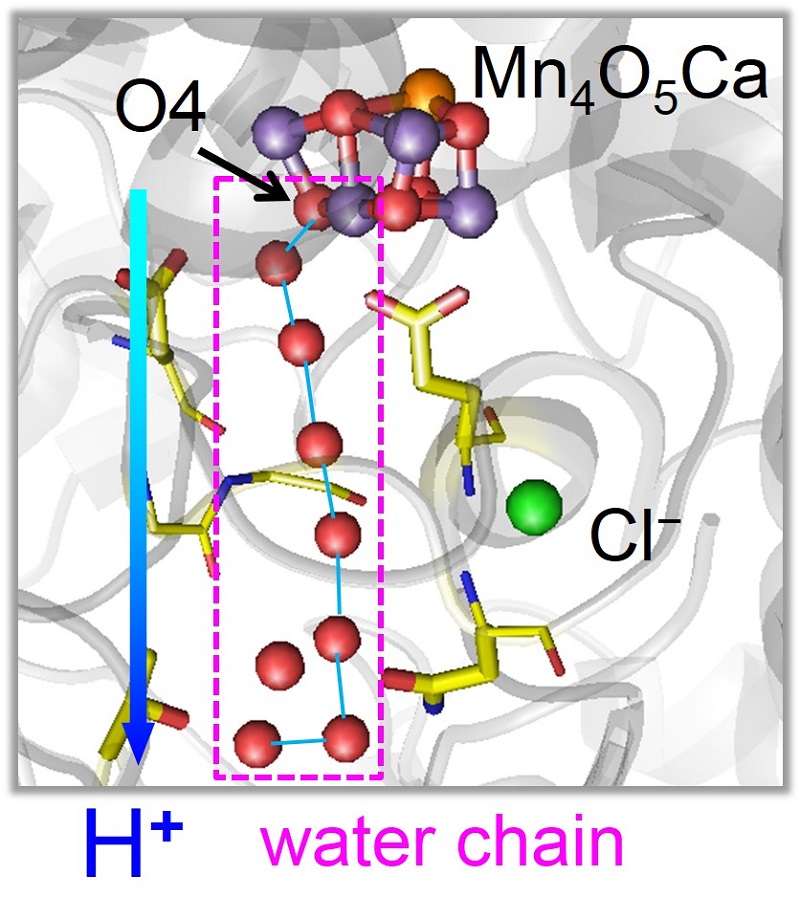 Researchers at the University of Tokyo carried out computational analysis of the reaction mechanism of photosystem II (PSII), a water-oxidizing enzyme found in higher plants and algae and which emits protons at multiple reaction stages. They demonstrated that the initial proton released by the enzyme originates from an oxygen atom in the protein’s manganese calcium cluster. This is a different part of the protein to that suggested in prior research.

In photosynthesis in higher plants and algae, PSII facilitates conversion of water to molecular oxygen using energy from sunlight. Currently, attempts are being made to create sources of renewable energy by artificially recreating this process. However, many aspects of the reaction mechanism need to be elucidated in order to make this a reality.

At the catalytic site of PSII, the complex Mn4CaO5 (Mn: manganese, Ca: calcium, O: oxygen) emits multiple protons at different stages of the reaction process. In order to emit those protons, they need a migration route by which they can pass. However, there were inconsistencies between the structure of PSII as determined from X-ray crystallography and the proposed proton release site and the proton migration route for the first reaction step, so the reaction mechanism remained unknown.

Professor Hiroshi Ishikita and Lecturer Keisuke Saito (Research Center for Advanced Science and Technology, The University of Tokyo), in collaboration with Professor A. William Rutherford (Imperial College London), used a quantum chemical calculation to demonstrate that the initial proton released from the enzyme originates from an oxygen atom “O4” in the manganese calcium cluster. The released proton is transferred along the proton transfer channel via O4 towards the PSII protein bulk surface.

“For the first time, it is possible to explain the experimental data without contradiction,” says Professor Ishikita. He continues, “Further improvement of the systems of artificial photosynthesis or bioenergy production can be expected from the present research achievement.”