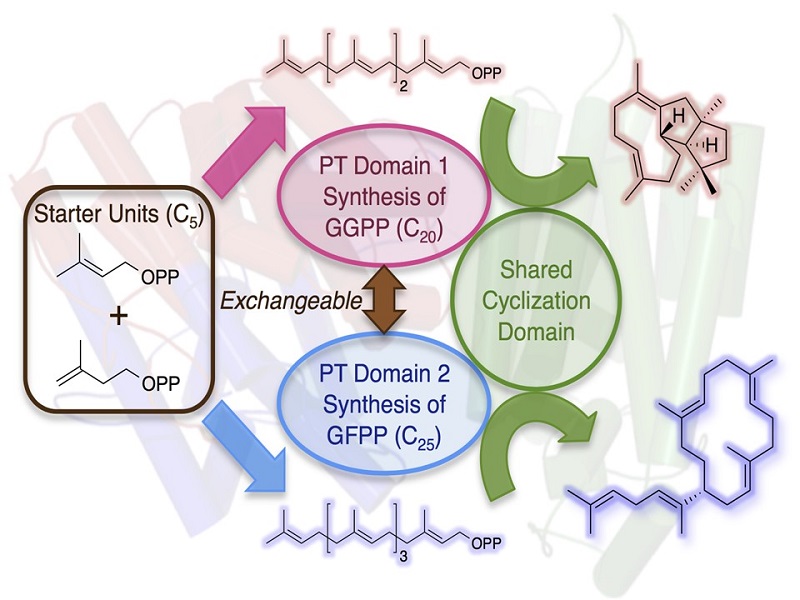 Functional conversion of a multitasking terpene synthase
The terpene synthase discovered in this study consists of the prenyltransferase (PT) domain that synthesizesthe 20-carbon linear compound (GGPP) and the terpene cyclase domain that transforms GGPP into a cyclized hydrocarbon. By domain swapping of the PT with that which synthesizes the 25-carbon compound (GFPP), another molecule was successfully obtained.
© 2015 Ikuro Abe.

A research group at the University of Tokyo has discovered and described the function of a unique enzyme involved in the biosynthesis of terpene (terpenoid) natural products, and successfully altered its function by altering its structure so that the enzyme produces another molecule.

Terpenoids are natural products synthesized from five-carbon isoprene units as building blocks, and include pharmaceutically important compounds such as the anticancer drug paclitaxel and antimalarial agent artemisinin. Terpenoids are synthesized by plants, microorganisms, and animals with the aid of enzymes.

The research group of Assistant Professor Yudai Matsuda and Professor Ikuro Abe at Graduate School of Pharmaceutical Sciences, The University of Tokyo, has identified a new terpene synthase from filamentous fungi that synthesizes a diterpene (terpene consisting of 20 carbon atoms) hydrocarbon with a novel molecular architecture. It is notable that the enzyme has two distinct domains; one is the prenyltransferase (PT) domain synthesizing the 20-carbon linear compound (GGPP) from five-carbon isoprene units, and the other one is the terpene cyclase (TC) domain that cyclizes the linear substrate into the final product. Thus, the terpene synthase is just like the Chimera in Greek mythology as two enzymes are fused as a single protein.

Although several similar multitasking enzymes have been described prior to this study, an attempt to obtain novel compounds by artificial engineering of this class of terpene synthases has never been reported. Intriguingly, the PT domains of some other chimeric enzymes provide the 25-carbon linear product (GFPP) predominantly instead of the 20-carbon GGPP, which led the researchers to hypothesize that another compound could be obtained by swapping the domain of the PT domain and generating a new Chimera. Consequently, a new cyclized molecule with 25 carbon atoms was successfully produced by exchanging the PT domain into the GFPP synthesizing enzyme.

“The methodology developed in this study is extremely simple and would be applicable to other similar chimeric enzymes,” says Associate Professor Matsuda. He continues, “Given that many genes thought to encode terpene synthase similar to that identified in this study can be found in the publicly available fungal genomes, molecules with novel structures, which might prove to be future drug leads, could be obtained using this strategy of domain swapping.”