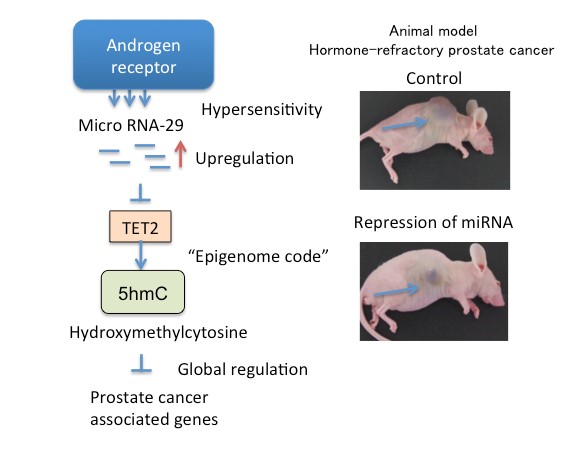 Mechanism by which prostate cancer cells develop hormone therapy resistance and suppression of prostate cancer malignancy using the novel mechanism discovered in the current research
(Left) In hormone therapy resistant cancer, the expression level of micro RNA-29 is elevated. As a result expression of TET2, a gene that encodes a protein responsible for DNA modification, is repressed resulting in a global change to the epigenetic condition and global activation of prostate cancer-related gene expression. (Right) A hormone therapy resistant tumor derived from a prostate tumor and implanted under the skin of a nude mouse. Although continued tumor growth was observed in control mice treated with an anti-androgen receptor drug, treatment with a micro RNA repression agent inhibited tumor growth.
© 2015 Ken-ichi Takayama

A research group at the University of Tokyo has revealed for the first time a novel epigenomic mechanism by which prostate cancer resistance is acquired. This result is expected to help in developing new treatment strategies for cancers that no longer respond to hormone therapy.

Prostate cancer is the most frequently diagnosed cancer in men in western countries and the number of patients and deaths is rapidly increasing also in Japan, making the treatment of prostate cancer an urgent clinical issue. Prostate cancer is promoted by the action of the male sex hormone, androgen. Because androgen induces the development of prostate cancer and accelerates tumor growth, hormone therapy that inhibits androgen action is effective and widely used for treating this cancer. However, the acquisition of resistance to hormone therapy in the course of treatment is a major problem, and the mechanism involved in the acquisition of hormone resistance remained to be identified.

Professor Satoshi Inoue (Department of Anti-aging Medicine, Graduate School of Medicine, the University of Tokyo) and Assistant Professor Ken-ichi Takayama (Department of Geriatric Medicine, Graduate School of Medicine, the University of Tokyo) have demonstrated the novel epigenetic mechanism involved in prostate cancer progression to hormone therapy resistance. The researchers found that micro RNAs, activated by androgen and induced in the hormone therapy resistant state, are responsible for a global epigenetic change in prostate cancer cells and are involved in the disease progression by repressing expression of the TET2 gene. This epigenetic change is the key to the activation of cancer gene expression and promotion of androgen action, leading to cancer progression to malignancy.

This finding could be useful for developing a novel diagnostic tool or drug for treating therapy-resistant prostate cancer. This research was conducted with support from the Project for Development of Innovative Research on Cancer Therapeutics from the Japanese Ministry of Education, Culture, Sports, Science and Technology (MEXT) and the Japan Agency for Medical Research and Development (AMED) and was published in the online edition of the journal Nature Communications on 25 September 2015 (UK time).

This was a collaborative study carried out with other laboratories including the Department of Urology, the Graduate School of Medicine, the University of Tokyo.