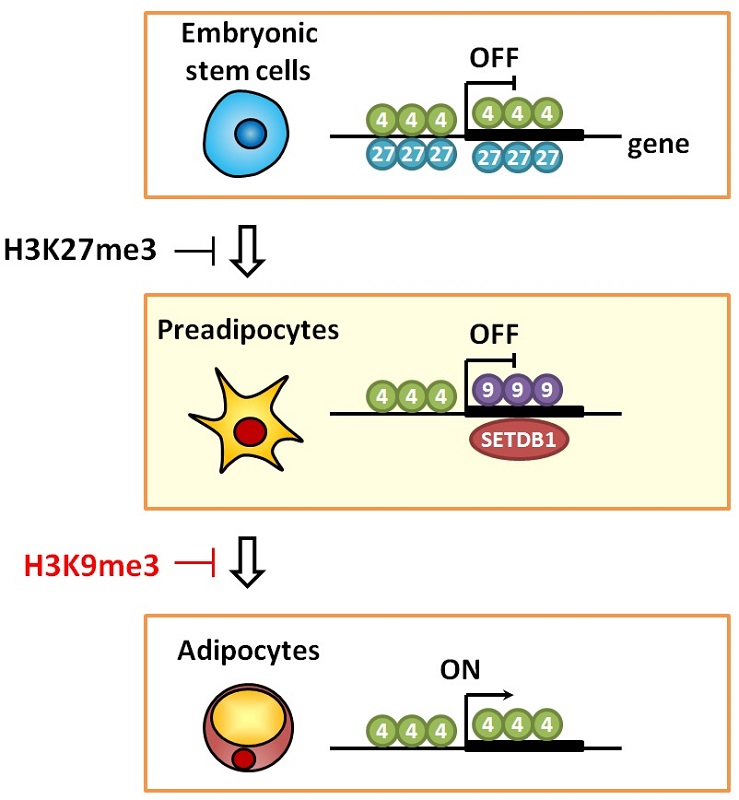 A University of Tokyo research group has revealed that novel chromatin domains repress the action of genes involved in fat storage by analyzing the epigenome, the information contained in chemical changes to the genome, in a type of immature cell (preadipocytes) that will later differentiate into mature fat cells (adipocytes). This research may lead to preventive methods and novel treatments for lifestyle diseases.

Preadipocytes and adipocytes have the same nucleotide sequence in their genomes. In preadipocytes, however, genes involved in lipid storage are repressed, while in adipocytes, the same genes are activated. Genes function differently in these cells because they have distinct epigenomes, the acquired and re-writable information contained in chemical changes to the genome. While the epigenetic mechanism that represses genes in embryonic stem cells has been well studied, the epigenetic mechanism in preadipocytes has not been elucidated.

The research group of Professor Juro Sakai, Assistant Professor Yoshihiro Matsumura and their colleagues at the Research Center for Advanced Science and Technology focused on the epigenome structure H3K9me3 as potentially involved in gene suppression in preadipocytes. The researchers performed a genome-wide analysis of H3K9me3 and the associated protein SETDB1 in preadipocytes using a next-generation DNA sequencer. In preadipocytes the researchers identified novel chromatin domains containing H3K4me3, which activates genes, and H3K9me3, which represses them, in tandem on approximately 200 genes. Finally, they revealed that the novel chromatin domains repress genes involved in lipid accumulation in preadipocytes.

"It was known that the epigenome structure H3K27me3 is involved in the repression of genes in the embryonic stem cell," says Professor Sakai. He continues, "This time, we have found the new epigenome structure H3K9me3 in preadipocytes. It is possible that this structure may also exist in nerve, skin and other progenitor cells and we look forward to future developments in this research."