Effect of name change of schizophrenia on mass media Result from 220,000 newspaper articles between 1985 and 2013 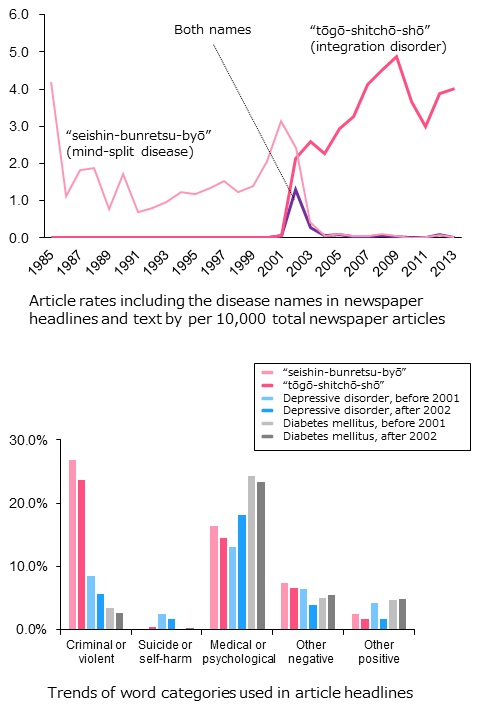 Researchers at the University of Tokyo examined 22 million newspaper articles covering a period of nearly 30 years and have demonstrated that after a change in the Japanese medical name of schizophrenia the old term almost disappeared from use and may have contributed to reducing discrimination and the social stigma attached to mental illness. On the other hand, articles that contain the new term even after the disease name change tended to associate it with crime, suggesting a trend in Japanese media coverage of mental illness.

Previous studies both in Japan and abroad have suggested that that common association of schizophrenia with crime in many articles in the mass media is one contributing factor to discrimination and stigmatization of schizophrenia. The medical term for schizophrenia in Japan was changed in 2002 from “seishin-bunretsu-byō” (mind-split disease) to “tōgō-shitchō-shō” (integration disorder) with the aim of reducing stigma attached to the condition. However, there have been no comprehensive studies exploring the impact of the name change on mass media portrayal of schizophrenia.

Lecturer Shinsuke Koike at the University of Tokyo Division for Counselling and Support/Division for Health Service Promotion and his colleagues examined 22 million newspaper articles published over a period of 29 years between 1 January 1985 and 31 December 2013 in four national newspapers (Asahi, Sankei, Mainichi, and Yomiuri). The researchers used text mining techniques to extract and analyse articles that included the old and new terms for schizophrenia in their headlines or full text. The results showed that while 38.9% of articles used both the old and new terms for schizophrenia in 2002, only three articles used the old term after 2004. However, 24.5% of words used in headlines of articles relating to schizophrenia that were published after the change were related to crime, and there was no difference in this trend either before or after the name change. The researchers suggest that articles for criminal and violent cases featuring schizophrenia should be more focused on the environmental background such as socio-economic background, family adversity, and alcohol and substance problems.

“We know from criminology research that crimes are related to socio-economic background (poverty), family adversity (parental divorce and maltreatment), and alcohol and illegal substance abuse more than mental illnesses such as schizophrenia,” said Lecturer Koike. He continues, “In mass media reports, criminal and violent cases should be discussed taking into account other factors to allow a more nuanced debate, not be simplistically related to mental illness.”

Division for Counseling and Support

Office for Mental Health Support, Division for Counseling and Support

Inquiries about the content of this page: Division for Health Service Promotion