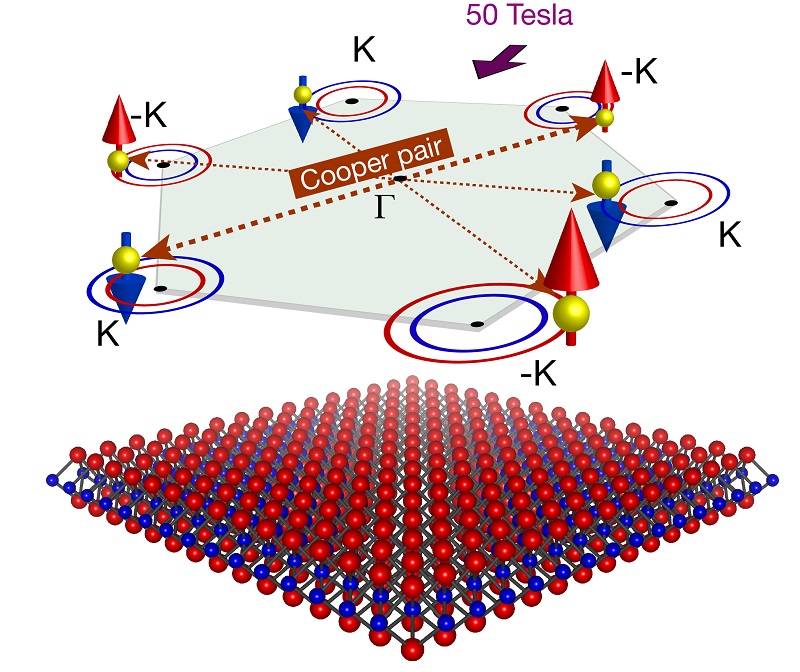 Researchers at the University of Tokyo have discovered a 2D superconductor, which is realized on the surface of molybdenum disulfide (MoS2), that can survive even in high magnetic fields over 50 Tesla, more than 100 times the power of the strongest commercially available Neodymium magnets. This result opens a new field of research into noncentrosymmetric superconductivity and provides important insights into the development of superconductors that are stable in strong magnetic fields.

Superconductors, which show zero resistance and therefore can allow the flow of current without power consumption, are the subject of intense research globally to discover their basic properties and their potential applications, particularly for future low power consumption technologies. In many superconductors described to date, two electrons with opposite spins form what is termed a Cooper pair, and it is these special electron pairs that make the superconducting state. A magnetic field aligns electron spins in the same direction, so a magnetic field strong enough to align the spins of the Cooper pairs in a superconductor can make the superconducting state unstable and eventually cause it to collapse. To overcome this limitation, researchers around the world have attempted to design and develop materials for the fabrication of superconductors that are stable under strong magnetic fields. As one class of candidate material, two-dimensional superconductors in many different forms created from atomic thick materials are being intensively investigated.

A research group headed by Professor Yoshihiro Iwasa (concurrently RIKEN research group leader) and doctoral student Yu Saito from the Department of Applied Physics and Quantum-Phase Electronics Center in the University of Tokyo, has prepared an atomically-thin 2D superconductor created from a single atomic layer of MoS2. Using a pulsed magnet system up to 55 Tesla in the Institute for Solid State Physics International MegaGauss Science Laboratory, the research group discovered that the superconducting state in MoS2 can remain stable even under in-plane magnetic fields of up to 52 Tesla at 1.5 Kelvin (-271.7 degrees Celsius).

In addition, the group revealed through both first-principles-based theoretical analysis and realistic numerical calculations that the spins of Cooper pairs are completely locked perpendicular to the plane of the material, resulting in the dramatic enhancement in stability against external magnetic fields. These results demonstrate for the first time that an unconventional 2D superconductor is being formed in the atomic layer of MoS2.

“Our findings indicate that, in a 2D superconductor without in-plane inversion symmetry, an unconventional superconducting state is realized that is very robust against external magnetic fields. We expect that exotic superconducting properties and new mechanisms for formation of electron pairs will be revealed in the near future,” says Professor Iwasa.

This research was published in the journal Nature Physics, on 7th December 2015.