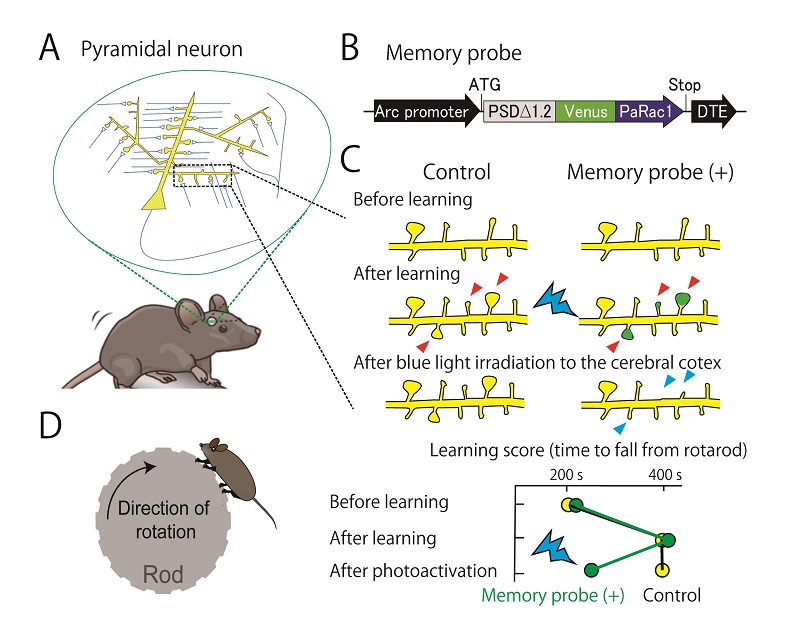 Erasure of memory by synaptic optogenetics
A) Pyramidal neurons in the cerebral cortex have numerous dendritic spines on which excitatory glutamatergic synapses are formed. Learning induced enlargement or generation of dendritic spines. B) A genetic probe was designed to selectively label enlarged or generated spines. The probe also encodes for a protein that can shrink spines and is produced in response to blue light irradiation. C) Enlarged or generated spines (red arrowheads) were labeled with the probe, and shrunk or eliminated (blue arrowheads) by blue light. D) Motor learning-induced improvement of score was abolished by blue light irradiation to the cortex.
© 2015 Haruo Kasai

Researchers at the University of Tokyo have developed a genetic fluorescent probe that can label newly enlarged or generated synapses mediating learning and memory in the mouse motor cortex, and then erase them when irradiated with blue light. This new genetic probe will be a powerful tool for deepening our understanding of brain function and learning in healthy individuals and in disease states and has the potential to contribute significantly to understanding the mechanisms of dementia and post-traumatic stress disorder.

In the cerebral cortex several ten billions of neurons are connected by synapses forming elaborate neuronal networks. Notably, most excitatory glutamatergic synapses are formed on spiny protrusions that project out from neurons called dendritic spines (Fig. A), and the bigger dendritic spines there are the stronger synaptic connectivity. Dendritic spines are dynamically modifiable through learning and memory resulting in changes in synaptic connectivity, and as a result are thought to be memory elements of the brain. However, this hypothesis has not been experimentally proven because there was no method to identify and alter large number of spines involved in memory formation.

Professor Haruo Kasai and his research group at the University of Tokyo Graduate School of Medicine’s Center for Disease Biology and Integrative Medicine have now developed optical probes which selectively label enlarged or newly generated spines, and, in addition, shrink and eliminate the labeled spines by blue laser irradiation to the living brain (Fig. B, C). Since this probe is genetically encoded, it was incorporated into most neurons in the mouse motor cortex. In the experiment, mice were trained on a motor task to improve their performance, creating new dendritic spines and enlarging existing ones. Irradiating the motor cortex with blue laser light then eliminated learning-induced spine changes, resulting in reversal of the task performance (Fig. D) and indicating that the spine changes are necessary for memory formation.

“This new technique allows us to visualize and control dendritic spines in action as the storage elements of memory for the first time,” says Professor Kasai. He continues, “We found that spines involved with memory formation were distributed densely in a relatively small fraction (10-20%) of all neurons in the cortex. This suggests that each memory is recorded in a specific strongly connected circuit.” The “synaptic optogenetics” probe developed by the group will be a powerful tool for further clarifying brain function in normal and disease states.