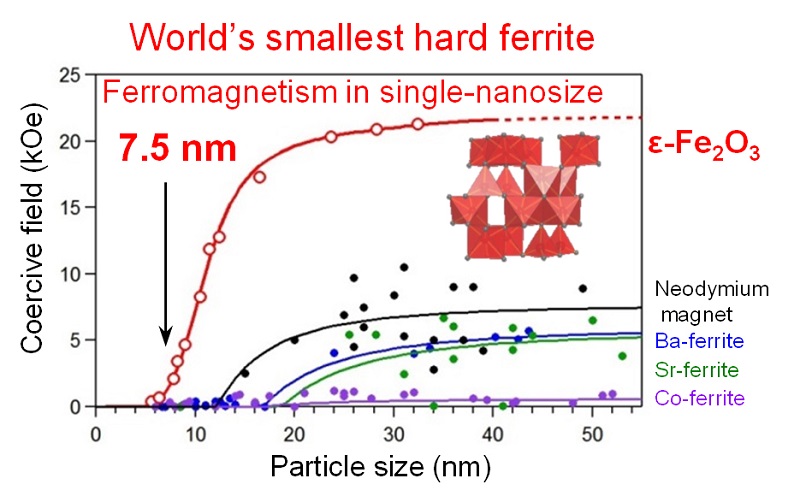 Research group at the University of Tokyo has successfully developed the world's smallest nanomagnet, a single-digit nanosize hard ferrite magnet composed of iron oxide. Being composed of iron and oxygen, the magnet is eco-friendly, low cost, and suitable for mass production. The magnet should find applications in high-density magnetic recording for the next generation of archive media.

Ferrite magnets made of iron oxide are widely used in permanent magnets, magnetic recording media, electromagnetic wave absorbing materials, and magnetic fluids. Ferrite magnets have found applications as magnetic recording media, but there is ever greater need to increase the storage density of such materials. One important challenge for increasing density is the development of nanometer-scale magnetic particles with a large coercivity (that is, resistance to change in magnetic state). Ferrite magnets have the chemical stability required at the nanometer scale, but since known materials cannot maintain magnetism as particle size is reduced, there were no hard ferrite magnets with a particle size of less than ten nanometers.

The research group of Professor Shin-ichi Ohkoshi in the Graduate School of Science, the University of Tokyo, has developed a new method to systematically synthesize epsilon-type iron oxide (ε-Fe2O3) particles of different sizes in the range of 5 to 40 nm, and revealed that ε-Fe2O3 larger than 7.5 nm exhibits magnetic properties (ferromagnetic phase transition). For use in magnetic recording media such as magnetic tape and hard discs, a material should have a coercive field larger than 3 kOe (kilo oersted). The present material exhibits a coercive field of 5 kOe at 8 nm particle size, demonstrating its potential as a material for ultra-high density magnetic recording. In addition, epsilon-type iron oxide has been shown theoretically and experimentally to exhibit not only ferromagnetic properties but also spontaneous electric polarization, making it also the smallest multiferroic ferrite particle yet.

Iron oxide, composed of only iron and oxygen, is a suitable material for mass production since this material is eco-friendly and low cost. The developed single-nanosize hard ferrite magnet is expected to be applied in the next generation use of high-density magnetic recording for archive media.

“The ferrite magnet that we have developed may have applications as a future material for magnetic tape storage, a technology used by Google and others as a mass storage medium for archiving big data and the focus of intense interest,” says Professor Ohkoshi. He continues, “Epsilon-type iron oxide has the lightest color among ferrite magnets, making it suitable for novel applications such as in transparent magnetic paints and magnetic color toner for printers.”