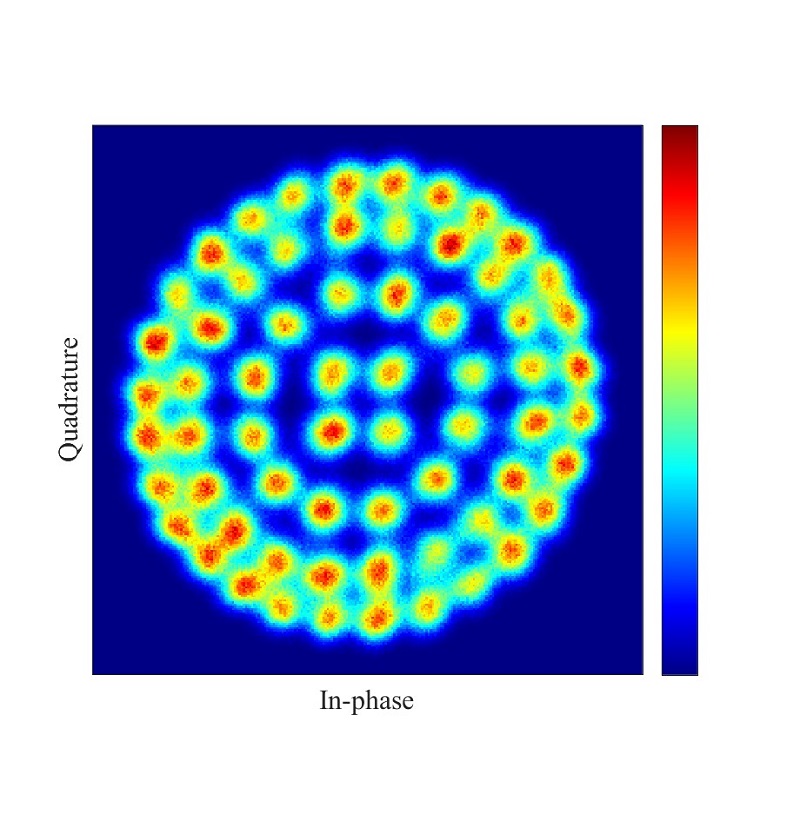 Amplitude and phase constellation of the 64 APSK signal from the Hodoyoshi #4 micro satellite
Image of data transmitted from the Hodoyoshi #4 satellite orbiting some 600 km above the Earth to the earth station at ISAS Sagamihara. Amplitude (radius) and phase (azimuthal angle) are plotted in this color-coded map. Color codes show the frequency of occurrence of events, with red indicating more frequent occurrence. The transmitted data can be decoded from this view without error.
© 2016 Hirobumi Saito.

In recent years Earth observation satellites are increasingly being equipped with high resolution cameras and radar able to discern objects of a few tens of centimeters in size. High-speed transmission systems are required to transmit the observational data obtained from such sensors to the surface of the Earth. However, the frequency bandwidth available for such use is limited, so in order to speed up transmission speeds, research has focused on development of technologies that make efficient use of the available frequency bandwidth.

When using electromagnetic waves to transmit digital data, information can be assigned to each combination of phase (frequency) and amplitude so that when the wave is received, the original information can be decoded by estimating the phase and amplitude that was transmitted. One promising technology that makes efficient use of frequency bandwidth and that is being pursued is 64 APSK, or 64 amplitude and phase shift keying. In 64 APSK, the 64 possible combinations of amplitude and phase allow the transmission of 6 bits of information, making it 1.5 to 2 times more efficient than conventional technologies. However, it is highly susceptible to noise and had yet to be demonstrated in Earth observation satellite.

The research group of Professor Shinichi Nakasuka at the University of Tokyo Graduate School of Engineering and Professor Hirobumi Saito at the Institute of Space and Astronautical Science (ISAS), Japan Aerospace Exploration Agency (JAXA) has developed the most efficient 64APSK data transmission system yet for an Earth observation satellite. The system was installed in the Hodoyoshi 4 satellite, which has a mass of just 64 kg, produced by Professor Nakasuka’s group. Using this system, the research group transmitted data from Hodoyoshi 4 at a rate of 505 Mbps to the ISAS 3.8m antenna station at the JAXA Sagamihara Campus, where it was received and successfully decoded.

“This is the fastest communication speed achieved with a micro satellite and builds on our earlier achievement of a record 348 Mbps in February 2015,” explains Professor Saito. He continues, “In this demonstration, only the 125MHz radio frequency bandwidth was utilized from among the full bandwidth allocation. Using the full available bandwidth, it is technically possible to achieve 3,000 Mbps data transfer rates. With proposals to deploy hundreds of micro satellites to send back near real-time images or movies of the Earth, this type of high speed communications technology will become essential.”