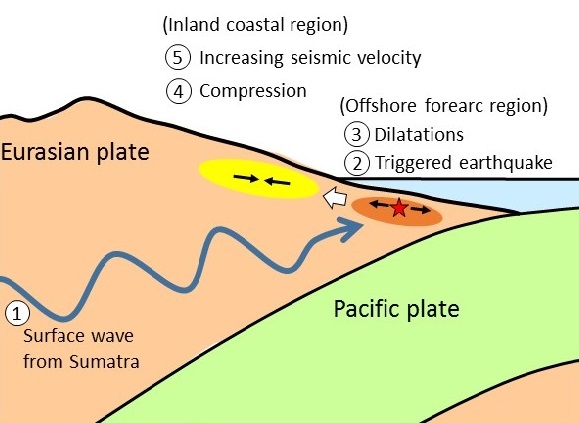 An illustration of cascading changes including in seismicity in the crust
Shallow normal faulting earthquakes are triggered by surface waves from the Sumatra earthquake, inducing crustal extension that results in compressional strain further inland, resulting in increased compressional strain and seismic velocity.
© 2016 Kazushige Obara.

A research group at the University of Tokyo and others found that the Sumatra earthquake induced increased seismic activity in northeastern Japan, revealing that elastic disturbances in the Earth’s crust spread over a broad area. This discovery improves our understanding of the Earth’s elastic system and of the physics of earthquake occurrence.

Earthquakes are caused by rocks slipping on both sides of a tectonic fault when the buildup of stress reaches a critical level. It is also well known that seismic “surface waves” generated by huge earthquakes can sometimes travel thousands of kilometers through the Earth’s crust and trigger earthquakes in other locations.

Research groups at the Earthquake Research Institute of the University of Tokyo, Los Alamos National Laboratory and Massachusetts Institute of Technology in the United States have revealed that when surface waves from the April 2012 magnitude 8.6 Sumatra earthquake passed through the Japanese Islands, in addition to triggering earthquakes, they also resulted in widespread changes in crustal strain and seismic velocity. The research groups used continuous seismic data recorded by the Hi-net (High Sensitivity Seismograph Network) operated by National Research Institute for Earth Science and Disaster Prevention, Japan, to make this discovery. The group also observed induced earthquakes off Fukushima Prefecture migrating southwestward at about 70 km per day and simultaneously detected compressional strain along the coast line. Furthermore, there was an increase in seismic velocity lasting for about three weeks beneath a wide area around the coast line of northern Japan.

“We interpret these observational results as follows,” says Professor Obara. “Surface waves from the Sumatra earthquake caused a change in forces within the crust that induced earthquakes due to a normal faulting mechanism within the shallow crust offshore from Fukushima, which was already close to fracture due to the 2011 Tohoku earthquake, causing the offshore earthquake zone to stretch in an east-west direction, in turn pushing into and compressing the coastal area. As a result of compressive stress, cracks in the upper crust under the mainland were closed, increasing the seismic velocity in the crust,” he continues.

This highly precise observation of widespread, dynamically induced crustal seismic activity presents a new characterization of the processes taking place within the Earth’s crust and their interactions that will advance our understanding of plate tectonics, seismicity, and seismic hazards.