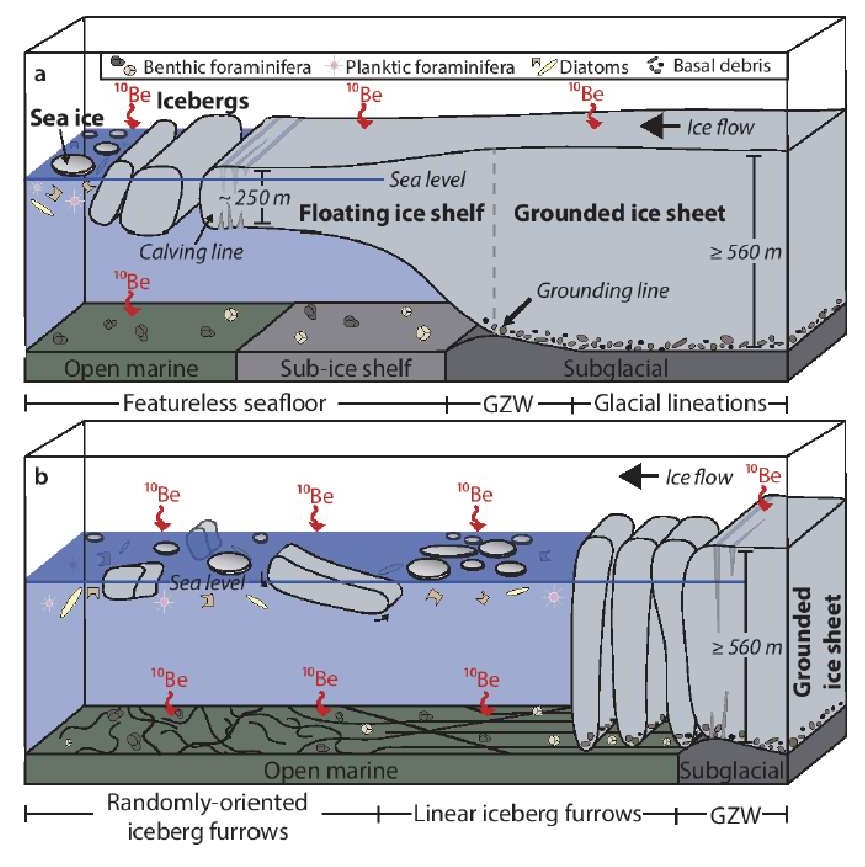 Schematic of Ross ice sheet expansion at maximum and after of collapse
The existence of the ice shelf restricted the movement of the Antarctic ice sheet at the upstream end, but the flow rate increased after the collapse of the ice shelf. Further evidence for this model is found in sea bed morphology and the sea-floor accumulation of plankton and radionuclides produced by cosmic rays impacting the ocean.
© 2016 Yusuke Yokoyama.

Researchers at the University of Tokyo have demonstrated for the first time that the Ross Ice Shelf, the largest ice shelf in the world, underwent a major collapse approximately 5,000 years ago during the late Holocene as a result of warming of the ocean and the atmosphere of the Antarctic region. This result will provide important insights for understanding future stability of the ice shelf under a warming climate.

Research on the Antarctic ice sheet is highly important since it is related to large changes in global sea levels. However, the difficulty of data collection and impossibility of using chemical techniques to recreate the past structure of ice sheets has delayed a comprehensive understanding of Antarctic ice sheets.

Now, the research group of University of Tokyo Atmosphere and Ocean Research Institute Professor Yusuke Yokoyama has developed a novel method measuring nuclides produced by cosmic rays falling to the earth’s surface to understand the past behavior of the ice shelf. The method applied to the samples obtained from a United States research vessel, revealed that the Ross Ice Shelf collapsed approximately 5,000 years ago during the late Holocene – that is 10,000 years more recently than previously thought. Also it was striking that the duration was a quite short- within 1,500 years. Comparing this data with an ocean/ice shelf numerical model developed by the research group, the researchers showed that the intrusion of warm water into the Ross Sea was an important factor in bringing about the collapse of the ice shelf.

“The US research group have announced evidence of surface melting and ice periphery temperatures for this period. Considered in conjunction with the result of this current research, there is a clear possibility that the introduction of warm air and sea water as a result of the impact of global climate change would destabilize the Ross ice shelf,” says Professor Yokoyama. He continues, “This research will improve our understanding of the ice shelf mechanisms that stabilize Antarctic ice sheets.”

This result was carried out in collaboration with the Japan Agency for Marine-Earth Science and Technology and Rice University and the University of California in the United States.