Accelerating loss of human-nature interactions What does the extinction of experience of nature matter? 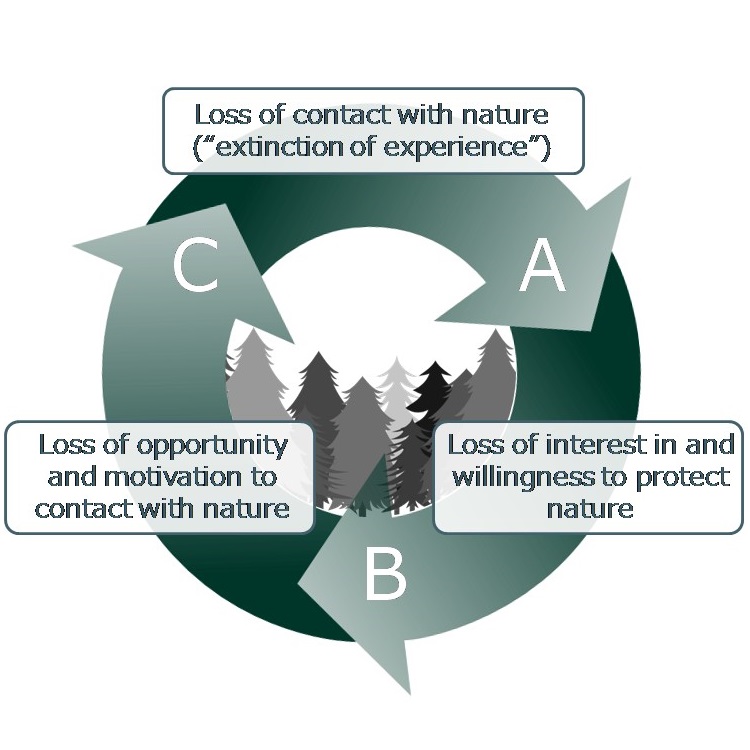 Causes and consequences of loss of human-nature interactions
The loss of interaction with nature (extinction of experience) not only diminishes a wide range of benefits relating to health and well-being, but also discourages positive emotions, attitudes, and behavior with regard to the environment (A). These consequences of extinction of experience can decrease opportunity and orientation to experience nature (B), implying a cycle of disaffection toward nature (C).
© 2016 Masashi Soga.

Researchers at the University of Tokyo gathered together research reports and data on experiences of nature to demonstrate that people worldwide are becoming less likely to have direct contact with nature and this ongoing alienation of humans from nature can have serious consequences for a wide range of aspects including public health, culture, and education.

Over recent decades, as urbanization accelerates and recreational activities change, more and more people are interacting less and less with nature. In a 2010 national survey of Japanese elementary to high school students, the National Institute for Youth Education found that the number of children who have never experienced several popular nature-based activities (e.g. mountaineering, tree climbing, catching insects) increased dramatically during the previous ten years. This ongoing alienation of humans from nature, the “extinction of experience”, is today commonly seen in many developed countries, such as the U.K, U.S. and China. As a result, the extinction of experience has increasingly been viewed both as a major public-health issue and as one of the fundamental obstacles to reversing global environmental degradation. Despite greater awareness of this lack of engagement with nature, however, little is known about the background to the phenomenon.

Summarising previous studies from a wide range of disciplines including environmental psychology, public health, and conservation biology, JSPS research fellow Masashi Soga in the Laboratory of Environmental Systems, Department of Urban Engineering, Graduate School of Engineering, has presented current understanding of the extinction of experience of nature, with particular emphasis on its causes and consequences. This review showed that (1) people worldwide are becoming less likely to have direct contact with nature (natural environments and associated biodiversity); (2) the loss of interaction with nature not only diminishes a wide range of benefits relating to health and well-being, but also discourages positive emotions, attitudes, and behavior with regard to the environment; and (3) there are likely to be several feedback pathways by which the consequences of loss of human–nature interactions can cause further disaffection and apathy toward nature.

“Although urban nature undoubtedly plays a central role in reducing the extinction of experience and in reconnecting humans with nature, most people, including city planners and policy makers, often consider urban greenspace and other natural components in residential areas to be luxuries rather than necessities,” says Soga. He continues, “To bridge this gap in perception, we argue that the importance of experiencing nature must be conveyed to a larger audience.”