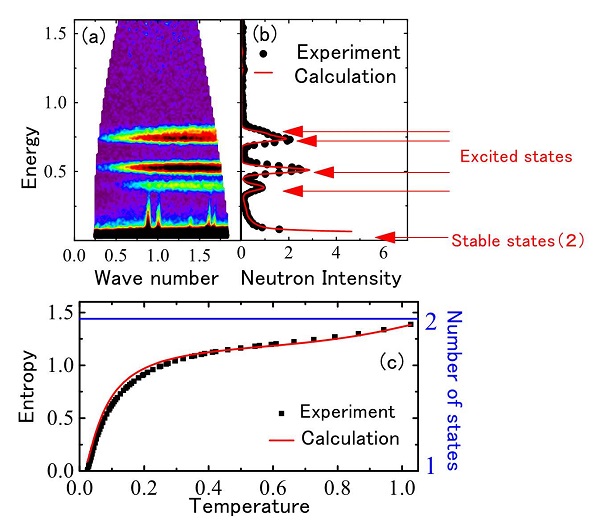 Neutron spectrum and entropy of spin frustrated magnet Ba3Yb2Zn5O11
The energy distribution of stable and excited states can be seen in neutron spectra in the panel (a) and (b). With decrease of temperature to absolute zero entropy approaches to zero in the panel (c) and accordingly the number of states changes from two to one.
© 2016 Takatsugu Masuda.

Researchers at the University of Tokyo have discovered two stable states in a tetrahedral spin material, a result that is seemingly inconsistent with the third law of thermodynamics. However, at extremely low temperatures near absolute zero they discovered a new liquid-like spin state and confirmed that the law is preserved.

Spin is a fundamental characteristic of some elementary particles and can be in one of two states, “up” or “down,” both with the same energy level. If there is a force that constrains spins to adopt opposite states, when considering just two spins the most stable condition (the lowest energy state or “ground state”) is for them to adopt opposite states, one up and one down. However, adding a third spin to make a regular triangular structure, the third cannot be opposite to both an up and down spin and is said to be “spin frustrated” – it could be either up or down, creating several possible states with the same energy level. Adding one more spin to make a regular tetrahedron and more spins are frustrated, meaning that there are even more possible spin states that could be adopted and there are multiple states in which the material is stable.

However, the third law of thermodynamics requires that at absolute zero (-273.15C), there must be only one ground state in a crystal. Consequently, the existence of a spin-frustrated material with multiple states with the same energy level appears to be inconsistent with the third law.

The research group of Associate Professor Takatsugu Masuda at the University of Tokyo’s Institute for Solid State Physics used neutrons to examine the internal state of the magnetic material Ba3Yb2Zn5O11 which exhibits spin frustration. The research group discovered that regular tetrahedral spins are realized within the material and that the tetrahedra are almost entirely isolated, showing almost no interaction with surrounding tetrahedra at all. Furthermore, each tetrahedron has two stable states, which is seemingly inconsistent with the third law of thermodynamics. However, when the researchers looked for a truly stable ground state, they found that as the temperature approached absolute zero entropy also approached zero, and it was confirmed that a single state is selected at ultralow temperatures. It was found that this state is a new “spin liquid” state in which there is no structural order among the spin particles.

“Discovering the existence of regular tetrahedral spin made it well worth coming all the way to Australia to make use of this neutron experimental apparatus,” says Masuda. He continues, “It was a pleasure to see the growth of my graduate student Tendai Haku as he revealed the spin model through careful calculation using the data brought back from Australia.”

Little is known about the newly discovered spin liquid state, but as details are elucidated it is expected that this new discovery may have applications in quantum computing technology.