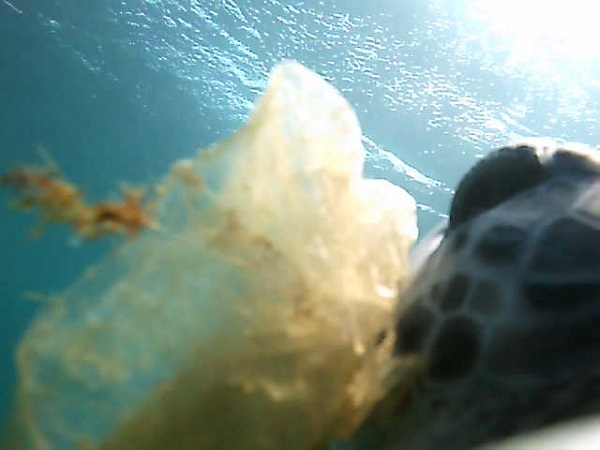 Previous stomach contents analyses showed that amount of debris ingestion was different between loggerhead turtles (Caretta caretta) and green turtles (Chelonia mydas), however, the reason for this inter-specific difference was not known because the process of the debris ingestion is difficult to observe under natural conditions.

The international research group of Professor Katsufumi Sato of the University of Tokyo Atmosphere and Ocean Research Institute, National Geographic Remote Imaging (US) and the Japan Marine Science Foundation, to compare the responsive behavior to artificial debris between these species under natural conditions, deployed animal-borne video cameras on the backs of sea turtles from 2007 to 2015, obtaining a total of 60 hours of video data from 10 loggerhead turtles and 52 hours from 6 green turtles. The encounter-ingestion ratio of carnivorous loggerhead turtles was 17% (2 out of 12 times) whereas this ratio for omnivorous green turtles was 62% (21 out of 34 times), suggesting that drifting artificial debris was hard to distinguish from common dietary elements (passively swaying marine algae and drifting gelatinous prey such as jellyfish) for green turtles.

“Ingestion of artificial marine debris by sea turtles is considered as a significant threat to their health and can lead to death. However, it should be noted that ingestion of marine debris does not necessarily have immediate lethal effect, as it appears that sea turtles frequently ingested natural debris such as bird feathers, stones and leaves, and a lot of natural and artificial debris are able to pass and excrete them.” says Sato. He continues, “Further research is required to understand the threat of debris ingestion on the health of sea turtles.”