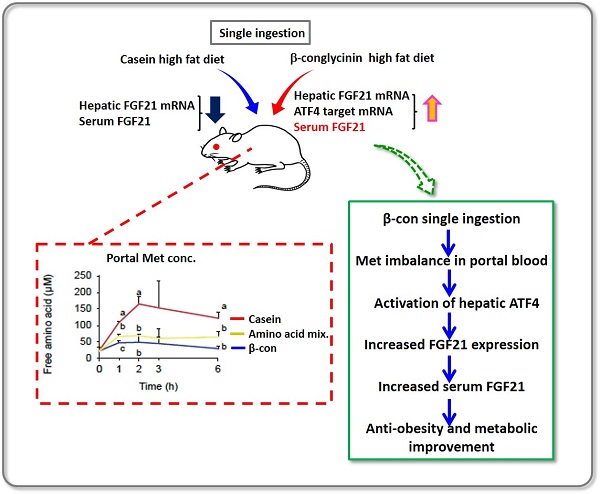 Researchers at the University of Tokyo have found that just one meal of β-conglycinin, which accounts for approximately 20% of the protein in soybeans, improves metabolism of fat by rapidly increasing levels of the protein FGF21 in the blood. This result indicates at a molecular level that a diet incorporating β-conglycinin as a functional food may help prevent lifestyle-related diseases through improving metabolism and reducing obesity.

Prior studies have shown that daily consumption of soybean protein is effective at preventing obesity and heart disease. In particular, research has focused on β-conglycinin, a protein that accounts for 20% of the protein in soybeans, as the potential active component responsible for this effect. However, the detailed molecular mechanism by which it might act was unknown.

Now, the research group of Professor Ryuichiro Sato at the University of Tokyo, Graduate School of Agricultural and Life Sciences, Department of Applied Biological Chemistry gave fasting mice a single meal incorporating β-conglycinin and exhaustively examined gene expression in the liver six hours after consumption. The group discovered that whereas expression of the gene for FGF21 is normally suppressed after eating, gene expression and circulating levels of FGF21 in the blood rose dramatically after consumption of β-conglycinin. In general, the action of dietary components is detected after administration over a period of weeks.

The group found that activation of the protein ATF4, a transcription factor that binds with DNA, is indispensable for the increase in FGF21, and that lowered levels of the amino acid methionine in blood flowing from the digestive tract to the liver caused by β-conglycinin ingestion are critical. In addition, when mice unable to produce FGF21 were fed the high fat diet containing β-conglycinin for a long period, the anti-obesity and metabolic improvement effects observed in normal mice were mostly abolished.

“Effects of dietary ingredients on metabolic improvement are usually demonstrated by long-term administration over a period of weeks,” says Sato. He continues, “The dramatic effects caused by single ingestion of β-conglycinin far exceeded our expectations. FGF21 has recently received a lot of attention because it exhibits promising metabolic improvement effects as a functional circulating factor. It is a great surprise that a soy protein has such a characteristic function. This suggests that β-conglycinin can be used proactively as a functional food ingredient.”