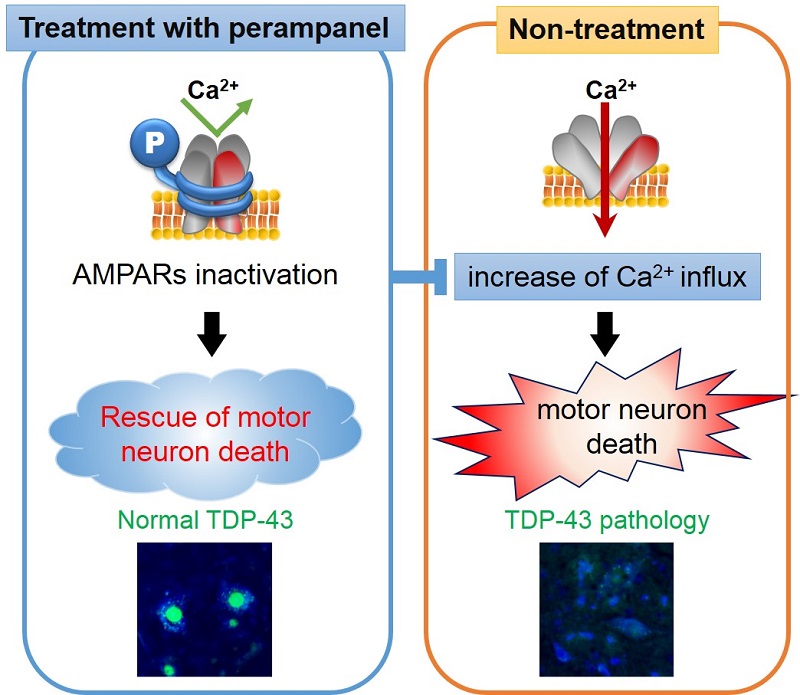 Effect of perampanel (AMPA receptor antagonist) on ALS therapy in mice
Perampanel helped stop motor neuron death associated with TDP-43 pathology in mice with sporadic ALS, which were given the drug orally (left). Mice that were not administered the drug showed signs of the pathology (right).
© 2016 Megumi Akamatsu.

University of Tokyo researchers have shown that a new drug used to treat epilepsy may hold the key for treating amyotrophic lateral sclerosis (ALS), a condition with no known cure, by demonstrating that long-term administration of the drug in mice with ALS symptoms helped stop the progression of the disease.

ALS is a degenerative neurological disease characterized by progressive weakness and loss of control of muscles that primarily affects the middle-aged and elderly. Patients with ALS die from respiratory muscle paralysis within a few years after the onset of the disease, but therapies that effectively alter its course are not currently available.

The research group of Lecturer Shin Kwak, Project Researcher Megumi Akamatsu and Project Researcher Yuya Yamashita of the University of Tokyo Graduate School of Medicine and their colleagues had previously reported that the suppression of the RNA editing enzyme ADAR2 in patients with sporadic ALS--a form of the disease that is not genetic and comprises the majority of cases—caused excessive flow of calcium ions into motor neurons, thereby killing the nerve cells.

In the latest study, the group administered the anti-epileptic drug perampanel (sold as Fycompa® by Eisai), thought to be effective in restricting the inflow of calcium ions into cells, orally for 90 days to mice exhibiting ALS symptoms. The results showed significant improvement in preventing the death of spinal motor neurons and the motor deterioration caused by the death of those cells. Moreover, the disorder seen only in ALS cases in which the protein TDP-43 is lost in a specific region of the motor neuron, was restored and normalized. The group also found that the drug was effective when administered not only prior to the onset of symptoms, but also after showing signs of the disease.

Although these results are from studies involving mice, perampanel is already approved as an anti-epileptic drug. Given that the doses administered to mice correspond to levels equal to those already prescribed to humans when treating epilepsy, and thereby proven safe, perampanel is seen as a likely candidate for clinical use in treating ALS.

“Although in theory I expected perampanel to be effective [in treating ALS], its effect on ALS symptoms was more than I expected. When evaluating a section of mouse spinal cord tissue, I was surprised to find that its condition had improved so much that it was almost normal. Perampanel has already been approved as an anti-epilepsy drug, so its adoption for practical application [as an ALS drug] may not be far off,” says Akamatsu. She continues, “It is my strong wish to improve the QOL (quality of life) of ALS patients, even in a small way, with this treatment.”