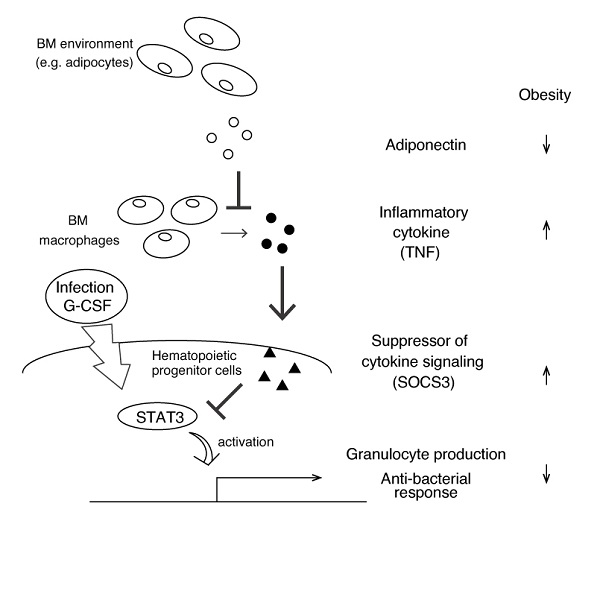 Researchers at the University of Tokyo found that deficiencies in the amount of the hormone adiponectin secreted by fat cells in obese mice impaired the formation in bone marrow of granulocytes, a type of white blood cell, causing cell infections to become aggravated. They also found that treatment with adiponectin was effective in preventing the infections from worsening.

The high prevalence of obesity poses a significant public health problem. The condition has been linked to various complications, including severe forms of infections whose mechanisms until now largely remained a mystery.

The research group of Professor Mineo Kurokawa, Assistant Professor Yosuke Masamoto, and their colleagues at the Department of Hematology and Oncology, Graduate School of Medicine, University of Tokyo, demonstrated that mice fed high-fat diets to develop obese conditions, compared to those on normal diets, showed decreased levels of adiponectin in their bone marrow, a principal blood-forming tissue, due to dysfunction in fat cells. This led to increased production of inflammatory cytokine TNF, a type of protein that causes inflammation and is involved in regulating immune cells, from large white blood cells in the bone marrow called macrophages. When hematopoietic progenitor cells, or stem cells that differentiate into various specialized blood cells, were constantly exposed to the inflammatory cytokine environment, the effects of suppressor of cytokine signaling 3, or SOCS3, a gene that suppresses the expression of a pathway in white blood cells involved in immune response, were amplified thus retarding blood production in an emergency situation and exacerbating infection. On the other hand, the group also demonstrated that the condition improved with adiponectin treatment.

The research outcome is significant by revealing in mice the relationship between abnormalities in metabolism and those pertaining to blood cell formation, or hematopoiesis, associated with obesity.

“In the current study, we revealed impaired hematopoietic response against infection in obesity,” says Masamoto. He continues, “The fact that adiponectin plays an important role for emergency granulopoiesis (granulocyte formation) in response to infection will pave the way to a novel therapeutic approach.”

Department of Hematology and Oncology, Graduate School of Medicine (Japanese)