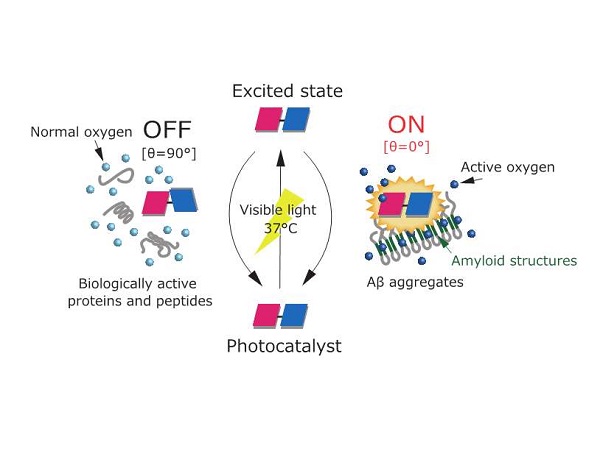 Oxygenation mechanism of the photocatalyst

A University of Tokyo research group has developed a new photocatalyst that can sense and selectively oxygenate only amyloid structures of aggregates of amyloid-β (Aβ), a peptide involved in the onset of Alzheimer's disease, and suppress their aggregation. The group showed that aggregation activity and toxicity were remarkably suppressed in the oxygenated Aβ aggregates.

Damage to nerve cells by aggregates of Aβ is thought to be involved in the onset of Alzheimer's disease. As a result, researchers have sought therapies to suppress the aggregation of Aβ. The group has been seeking to establish new Alzheimer’s treatments using catalysis, and previously developed a photocatalyst that suppressed the aggregation of Aβ by oxygenating Aβ when irradiated with light. However, in addition to Aβ, the catalyst also oxygenated other biomolecules that play important roles in the body at the same time.

In the future, enabling this catalyst to oxygenate a substrate even with the application of a tiny amount of light energy and making further improvements to minimize impact on the body, may lead to new treatments for Alzheimer's disease using catalytic reactions.

Sohma, who managed the research in the laboratory, says, “We had to modify the catalysts many times by trial and error, but finally we successfully developed a catalyst that can sense and selectively oxygenate only amyloid structures of Aβ aggregates.” He continues, “Next we will try to apply our catalyst to in vivo animal experiments.”

The results of this research were published in the online edition of the British scientific journal Nature Chemistry on 27 June 2016 (UK time).