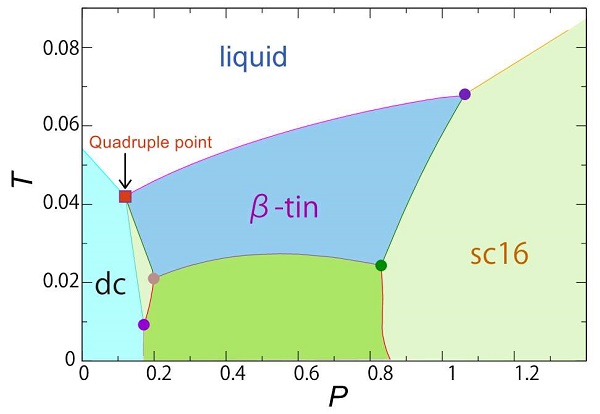 Researchers at the University of Tokyo have shown through simulation that four phases of a substance composed of a single component can coexist at thermal equilibrium—where all parts are at the same temperature and pressure—a situation that runs counter to the laws of thermodynamics (as stated in the Gibbs phase rule). The findings not only deepen our basic understanding of phases of a substance existing in equilibrium, but they also may be applied to the development of functional materials possessing phase-change properties.

We constantly come across instances where various phases of a substance—such as gas, liquid, and solid—coexist with each other. For example, water (liquid) and ice (solid) coexist in shaved ice, a popular summer treat. Furthermore, the three phases of gas, liquid, and solid in water molecules coexist at a particular temperature and pressure known as the triple point. In general, no more than three phases of a substance made from a single component can coexist at thermal equilibrium, a state governed by what is widely called the Gibbs phase rule.

That is, the maximum number of phases of a single-component substance that can coexist is widely accepted as three. Mathematically, however, under a special condition, four-phase coexistence is possible.

The research group led by Professor Hajime Tanaka of the Institute of Industrial Science at the University of Tokyo has shown that four phases—three crystalline phases and one liquid phase—can coexist by introducing an extra parameter to the interaction potential (Hamiltonian) used to describe the behavior of silicon-like atoms. Moreover, the group systematically determined the particular temperature and pressure of the quadruple point where the four phases coexist, and defined the phase transition behavior—switching from one phase to another—around this point.

This study is expected not only to deepen our fundamental understanding of the coexistence of phases at thermal equilibrium, but may also prove useful in the development of functional phase-change materials as it demonstrates that multiple phase transformation can be induced through weak disturbance (perturbation) near the quadruple point.

“When we study thermodynamics, we are taught that for more than one phase to coexist at thermal equilibrium, the chemical potential of the phases must be equal to each other, and this condition is expressed by the Gibbs phase rule. We usually are not taught that there can be a special case apparently violating this rule. Our study shows that by changing the interaction potential of a system, which is usually material-specific, we can search such a special condition in a systematic manner,” says Tanaka. He continues, “We hope that such a situation will indeed be realized and applied to phase control of materials in the near future.”