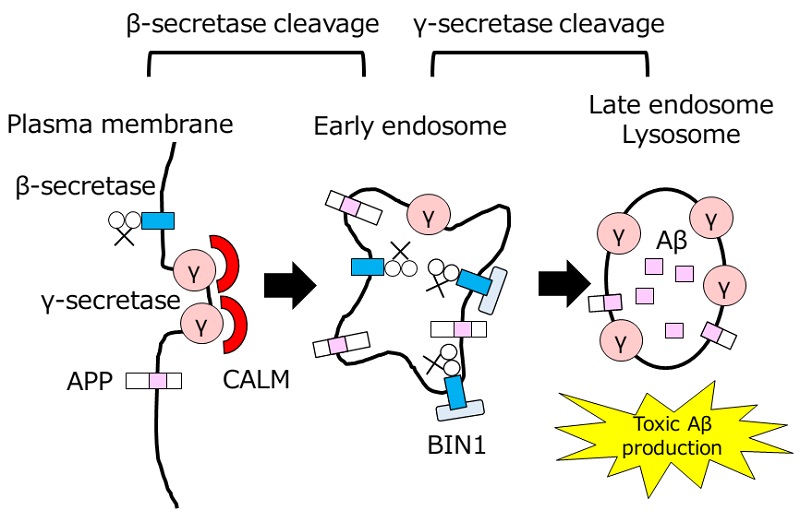 A group of researchers at the University of Tokyo and their collaborators have found that genetic risk factors for Alzheimer’s disease regulate the intracellular transport of enzymes responsible for the production of amyloid-β (Aβ), and that disruption of this transport mechanism triggers the onset of the disease. The current result is expected to lead to the development of novel preventive and therapeutic strategies to combat Alzheimer’s by utilizing drugs for intracellular transport that suppress the production of Aβ.

Developing strategies for the prevention and treatment of Alzheimer’s disease, the most common cause of dementia, is a pressing need in an aging society. Evidence from multiple studies show that accumulation of Aβ that make up the senile plaques deposited in the brain triggers Alzheimer’s to develop, while over 20 genes have been identified in recent years as genetic risk factors for the disease; but little is known about the genes’ mechanisms that bring on the disorder.

Aβ is derived through cleaving, or snipping, of its precursor protein, APP, by β- and γ-secretase enzymes; however, much still remains unclear about which compartment in the cell is involved in this and other processes, and what mechanisms are responsible for regulating these cell cleavages.

The research group led by Professor Taisuke Tomita at the Graduate School of Pharmaceutical Sciences at the University of Tokyo, and their collaborators found in earlier research that one of the risk factors, a protein called CALM, which is involved in vesicular transport, confines γ-secretase to a particular area in the cell and regulates the production of toxic variants of Aβ. In the current study, the group analyzed the role of BIN1, considered the most dangerous among the vesicular trafficking-related risk factors for Alzheimer’s, and found that it regulates intracellular transport of β-secretase, and is a molecule that affects Aβ production.

These results imply that disruption in the intracellular trafficking of Aβ-producing enzymes is related to the onset of Alzheimer’s disease, and mechanisms that target BIN1 and CALM may be sought after in new drugs being developed to combat the disease.

“We were excited with our findings that two distinct genetic risk factors affect the vesicular trafficking of the enzymes involved in Aβ production. These results indicate that intracellular transport is a key mechanism involved in the onset of Alzheimer’s disease,” says Tomita. He continues, “We will apply these results to the development of prevention, diagnosis and therapeutic drugs for Alzheimer’s disease, and we will also continue our research on other risk factors.”

This study was supported by the Brain Mapping by Integrated Neurotechnologies for Disease Studies (Brain/MINDS) project of the Japan Agency for Medical Research and Development (AMED).

Laboratory of Neuropathology and Neuroscience, Graduate School of Pharmaceutical Sciences