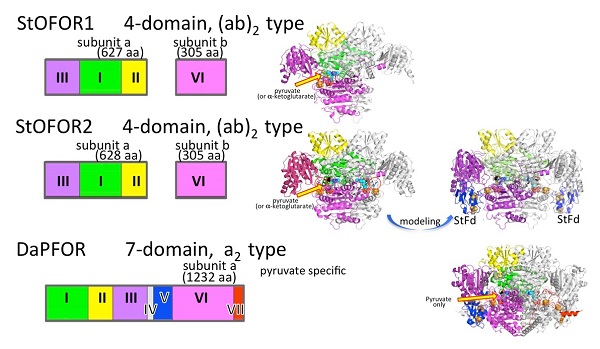 A University of Tokyo research group determined the three-dimensional structure of a family of enzymes called OFOR (2-oxioacid:ferredoxin oxidoreductase) active in primitive cell metabolism that were extracted from Sulfolobus, a group of microorganisms classified as archaea that live at high temperatures (above 80 degrees Celsius). The enzymes have the simplest structure but show multiple substrate specificity, the ability to catalyze reactions in various molecules. The current research sheds light on the enzymes’ structure-function relationship and promises to contribute to our understanding of primitive metabolic systems involved in the origin of life, as well as paving the way for practical applications to help control disease-causing microorganisms utilizing OFOR.

The research group led by former Professor Takayoshi Wakagi at the University of Tokyo Graduate School of Agricultural and Life Sciences first separated the StOFOR1 enzyme—known to catalyze reactions in a wide range of substrates, including the acids pyruvate and ketoglutarate— from Sulfolobus. Compared to pyruvate-specific DaPFOR—the only OFOR whose structure had been reported so far—with seven domains (regions of a protein with distinct structures and functions), StOFOR has only four domains but has wide substrate specificity. This implies that StOFOR plays important roles in both central and amino acid metabolisms, but the structural basis underlying this discrepancy has not been known.

Determining the detailed three-dimensional structure of an enzyme is important for understanding its function. In the current study, researchers succeeded in determining the three-dimensional crystal structure of StOFOR1 and its genetically related enzyme StOFOR2 using a technique known as X-ray crystallography. When the scientists compared the 3-D structures of these two enzymes with DaPFOR, they found the three shared a similar central structure despite the amino acid sequences of their domains being different. Furthermore, the group created an oxidation reaction-competent structure by combining StOFOR2 and the ferredoxin protein from Sulfolobus, whose structure is already known, and found their model further resembled DaPFOR. However, the part of StOFOR that binds with 2 oxoacid, a substrate, was wide enough to accommodate not only pyruvate but also ketoglutarate. The amino acid sequence involved in this binding feature was also confirmed by analyzing the mutant model created in the lab.

"Our long struggle lasting 20 years to determine the structure of the OFORs has at last reached a successful conclusion," says Wakagi. He continues, "By further determining the structure of various OFORs with different domain constitution or from disease-causing microbes will lead to new drug design in the future."

Department of Biotechnology, Graduate School of Agricultural and Life Sciences

Laboratory of Enzymology, Department of Biotechnology, Graduate School of Agricultural and Life Sciences