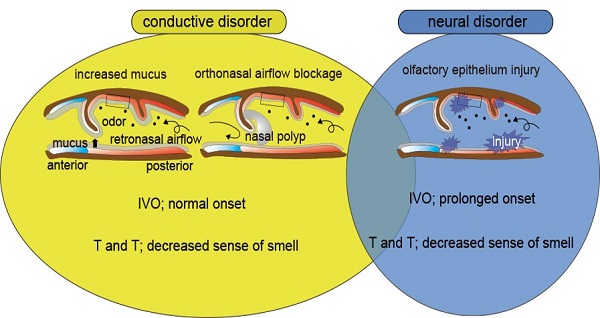 A group of researchers at the University of Tokyo and their collaborators found clues for identifying different types of smell-related disorders by studying olfactory sensory neurons, the nerve cells involved in odor detection, in mice. The current findings may eventually lead to the development of tests that can detect smell-related neural disorders caused by damaged olfactory nerves, and distinguish them from conductive disorders in which odor molecules do not reach the sensory nerves that detect smell.

Many of us have experienced a loss of smell when suffering from nasal inflammation or infection. A runny or stuffy nose can block nasal passages and cause what are known as conductive disorders that prevent odors from reaching the olfactory nerve; another way that we can lose our sense of smell is through neural disorders caused by damage to the olfactory nerve itself. Treatment for olfactory conditions varies significantly depending on which of the two types of disorders—conductive or neural—is causing the symptoms; therefore, determining the root cause is important in devising an effective course of treatment, but a smell test for selectively detecting neural disorders—and distinguishing them from conductive disorders—was not available.

The intravenous olfactory (IVO) test is widely used as a way to evaluate a person’s sense of smell. The test checks the subject’s ability to recognize odors by injecting thiamine (vitamin B1) into the vein; the vitamin’s odor proliferates in the relatively enclosed cavity of the lung’s air sacs and increasing numbers of olfactory sensory neurons are stimulated over a short period of time through respiratory activity. Research on applying the test to determine which of the two types of olfactory disorders a patient is suffering from, however, was still lacking.

The research group led by Professor Tatsuya Yamasoba, and Assistant Professors Shu Kikuta and Yu Matsumoto at the Department of Otolaryngology, the University of Tokyo Hospital, observed patients who underwent sinus surgery for chronic rhinosinusitis, a condition arising from the combination of the two types of disorders, and examined pre-operative factors that likely affected odor recognition following surgery. The researchers found that the group of patients who exhibited slow onset of olfactory sensory neuron stimulation in an IVO evaluation prior to their operation showed almost no improvement in their symptoms following endscopic surgery to improve airflow, thereby implying that complications from neural disorders played a role in bringing on their condition. This also suggests that the time it takes from intravenous injection of the odorous vitamin to onset of sensory neuron stimulation in the IVO test may provide a clue for differentiating between conductive and neural disorders.

Next, the researchers injected thiamine intravenously through the tail in mice and found that the length of time, or latency period, until the onset of olfactory sensory neuron response did not change for the animals afflicted with conductive disorders, but was prolonged for those with neural disorders. Furthermore, the group observed a correlation between longer latency and the severity of disorders in olfactory epithelium, the nasal tissue involved in smell.

“We are pleased to come up with a novel application for the IVO test,” says Yamasoba. He continues, “We are hopeful that it will prove useful in the cause-based classification of patients with olfactory disorders, and contribute toward selecting appropriate therapies, as well as in making prognoses.”

This outcome is the result of a research collaboration with the Department of Otorhinolaryngology at Jikei University School of Medicine, in Tokyo.