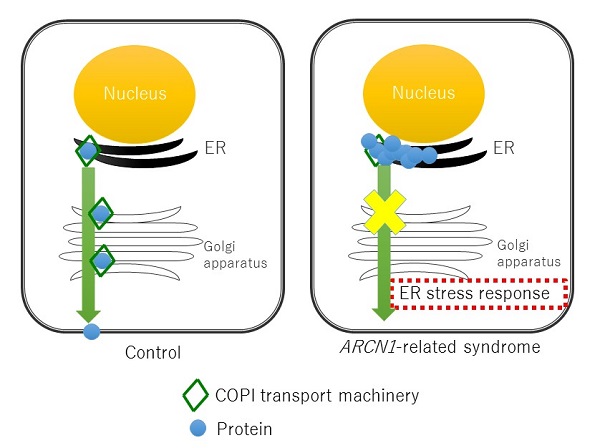 Molecular mechanism of ARCN1-related syndrome
ARCN1 is a component of the COPI protein complex, which controls intracellular transport. In ARCN1-related syndrome, mutations in the ARCN1 gene create disruption in intracellular transport, and proteins that are not properly modified accumulate in the cells causing stress on the endoplasmic reticulum (ER). Collagen, also transported outside the cell by the COPI protein complex, similarly builds up in the cell. As a result, collagen secretion is reduced and those affected develop skeletal symptoms such as a small jaw and short stature.
© 2016 Kosuke Izumi.

Researchers at the University of Tokyo and their international collaborators discovered a genetic disorder, an ARCN1-related syndrome, characterized by distinct facial features--notably a small jaw--short stature, and developmental delay. The researchers also showed that the disease is caused by the disruption of intracellular transport resulting from gene mutations.

With the adoption of next-generation gene sequencers, diagnosing diseases caused by abnormal genes is becoming easier. Moreover, the causative genes of rare diseases are often involved in basic and important biological processes, and studying them can lead unexpected discoveries.

Research groups led by then-Research Associate Kosuke Izumi (currently at the Children's Hospital of Philadelphia) and Professor Katsuhiko Shirahige of the Research Center for Epigenetic Diseases, Institute of Molecular and Cellular Biosciences, the University of Tokyo, and their collaborators analyzed the genes of four patients with the characteristic physiognomy—including a small jaw—short stature, and developmental delay, and found that mutations in the ARCN1 gene were responsible for causing the disease. ARCN1 produces proteins involved in transporting molecules within cells. The researchers showed that ARCN1 gene mutations created disruption in the intracellular transport of molecules, causing collagen, an important protein for bone formation, to accumulate in the cells, thereby leading to systemic symptoms including short stature.

The current line of research revealed that intracellular transport controlled by the ARCN1 gene is critical to bone and nerve development, and pointed out the part of the molecular mechanism where the ARCN1-related syndrome appears. The research outcome holds promise of paving the way for the development of drugs to treat bone and neurological disorders attacking the ARCN1 gene.

“Knowing how stressful it is for families of a child with a rare disorder to not receive a diagnosis, I was extremely pleased to finally be able to make one,” says Izumi. He continues, “Based on the disease mechanism we found in this study, my next step would be to expand my research in order to discover therapies.”

“Rare-disease research, in and of itself, is important for diagnosis and treatment; but it is important also for elucidating the universal principle of living organisms,” says Shirahige. He continues, “I am deeply indebted to the families of patients who offered us this opportunity.”

Laboratory of Genome Structure and Function, Institute of Molecular and Cellular Biosciences