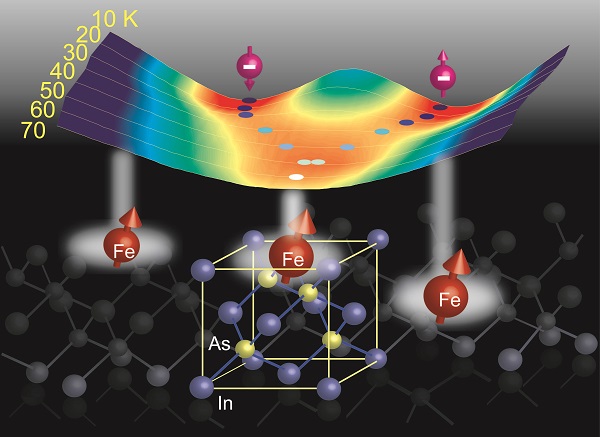 A research group at the University of Tokyo succeeded in observing ferromagnetism (the magnetic property found in substances like iron magnets) and large spontaneous spin splitting (energy difference between two different spin states) in the energy band containing conduction electrons, known as the conduction band, of an (In,Fe)As alloy semiconductor, which they created by doping iron (Fe) atoms into indium arsenide (InAs), a III-V semiconductor often used in high-speed electronic devices. This is the first report of such spontaneous spin splitting in the conduction band of a ferromagnetic semiconductor (FMS) produced by supplanting a few percent of atoms in a non-magnetic semiconductor with magnetic ones.

FMS materials are highly compatible with existing semiconductor technology, and are considered important for their potential in yielding non-volatile memory, reconfigurable logic, quantum computing, and other novel functions with ultra-low power consumption, by integrating the spin degree of freedom into conventional semiconductor devices.

Interactions between the magnetic atoms and carriers (mobile electrons or holes that carry electric charge currents) doped in semiconductor crystals are thought to induce ferromagnetism and large splitting between the up-spin and down-spin electron bands of the host semiconductors. So far, however, very few instances of such spin splitting in the bands have been observed in FMSs; moreover, N-type FMSs, considered a necessity in semiconductors, are absent in groups IV and III-V semiconductors, which have good compatibility with semiconductor electronic devices, but researchers have so far produced only P-type FMSs.

The research group of Dr. Le Duc Anh, Visiting Associate Professor Pham Nam Hai, and Professor Masaaki Tanaka at the Graduate School of Engineering, the University of Tokyo, chose to dope iron atoms as the magnetic element. Iron atoms are neutral (neither donor nor acceptor) in III-V semiconductors, which enables separation of the origins of localized spins and carriers, making it possible to create not just P-type, but also N-type FMSs. The scientists found that doping iron (Fe) to indium arsenide (InAs) induces ferromagnetism, when increasing the electron density to 1018 cm-3 or above, and they observed the first-ever case of N-type FMS in a III-V semiconductor. They also discovered—using a method called tunneling spectroscopy for a detailed study of the conduction band in (In, Fe)As—large spontaneous spin splitting (30-50 milli-electron volts) in the ferromagnetic temperature range.

Since N-type ferromagnetism and large spin splitting in the conduction band structure of semiconductors are beyond the scope of traditional theory, the current outcome becomes significant for enhancing our knowledge of condensed matter physics including semiconductors and magnetism, and semiconductor spintronics. As FMSs with large spin split band structure would enable design and fabrication of a variety of semiconductor devices that utilize spin degrees of freedom, the present finding represents a big step towards realizing practical spintronic devices.

Anh, who carried out most of the experiments, says, “I feel a strong attachment to research on Fe-doped N-type ferromagnetic semiconductors because they were the subject of my undergraduate thesis. Since there were very few prior theoretical and practical works on N-type ferromagnetic semiconductors and their properties are quite different from the existing P-type ones, we faced a lot of difficulties at the outset in growing samples and explaining the experimental results. By clearly observing spin splitting in the current study, now I am extremely eager to explore the potential for various device applications in the near future.”