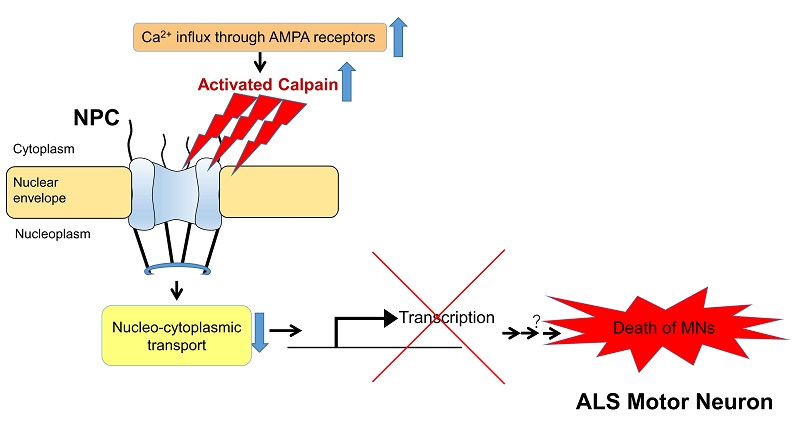 A University of Tokyo research group and their collaborators have shed light on one of the mechanisms responsible for the onset of sporadic ALS—a non-genetic form of the neurodegenerative disorder also known as Lou Gehrig’s disease—by demonstrating in an experiment with mice that damage caused by the protein-cutting enzyme calpain to the critical pathway shuttling essential molecules between the cell’s nucleus and cytoplasm leads to the death of nerve cells. The current outcome holds promise of advancing our understanding of the onset of the disease.

The group led by Project Researcher Takenari Yamashita and Visiting Researcher Shin Kwak at the University of Tokyo Graduate School of Medicine (and concurrently professor at the International University of Health and Welfare) had revealed in a previous study that a protein in the cell membrane, called a Ca2+-permeable AMPA receptor, that transmits calcium into the cell becomes capable of releasing excessive amounts of the mineral into the cell. This leads to the expression of the protein in the motor neuron, the nerve cell that regulates the skeletal muscles and other movement-related components, causing excessive flow of calcium into the neuron, which in turn sets off TDP-43 pathology, an abnormal localization of the TDP-43 protein in the cell and a hallmark of ALS, caused by activated calpain. However, much about the mechanism of cascading events resulting in motor neuron death was hard to pin down.

In the current study, the research group found that the nuclear pore complex (NPC), which serves as a pathway for transporting RNA, proteins, and other molecules between the cell’s nucleus and cytoplasm, was damaged by activated calpain in mice with ALS symptoms: The calpain was cleaving nucleoporins, proteins that constitute NPC, thereby impairing nucleo-cytoplasmic transport. This suggests the impairment disrupted the expression of vital genes and decreased physiological activity in motor neurons, leading to cell death. As similar changes were observed in experiments using motor neuron tissue of ALS patients, the mechanisms presented in the study are likely involved in the onset of ALS.

Moreover, studies have found disruption in the nucleo-cytoplasmic transport in some forms of familial ALS—which, unlike sporadic ALS, is inherited—thereby pointing to the possibility that a similar mechanism is at play in bringing about different types of the disease, even though their root causes may differ.

“This study is an extension of the research our group has long been conducting for over 20 years, and which I have been a part of for more than 10 years. I believe the present findings have brought us closer to understanding the mechanism directly linked to death of neuronal cells by revealing one facet of the molecular mechanism leading to motor neuron death in sporadic ALS, the non-genetic form of the disease,” says Yamashita. He continues, “Regardless of whether the ALS is sporadic or familial, they appear to share a common molecular mechanism that leads to the onset of disease. I would be most pleased if this has implications for broadening the applications of therapies being developed to treat sporadic ALS.”

The current research was carried out in collaboration with Professor Hitoshi Aizawa at Tokyo Medical University.