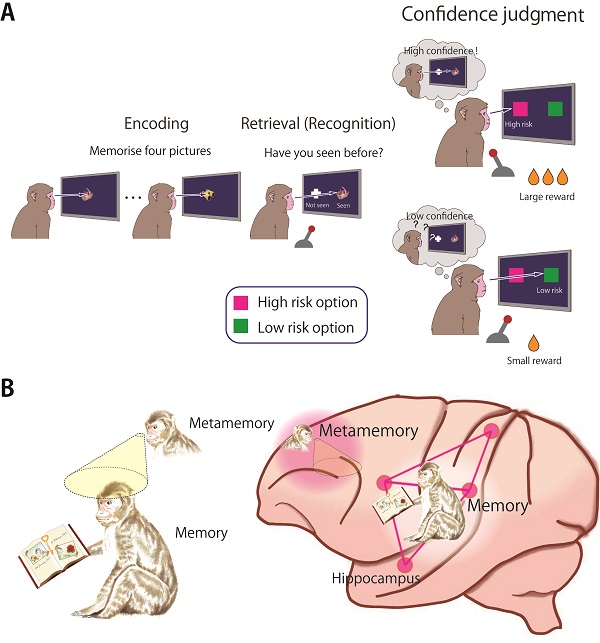 Behavioral paradigm and brain mechanism for metamemory
A. Diagram A on top depicts a etamemory task for macaque monkeys in which they judged self-confidence on their own memory. If they chose to place a high bet (high-confidence option), the monkeys received a large reward only when they answered correctly in the preceding memory task. If they bet low, (low-confidence option), the monkeys received a small reward regardless of whether they answered correctly or not in the memory task.
B. Diagram B on bottom illustrates the neural substrate essential for metamemory processing (area 9 in the lateral prefrontal cortex), which is separated from the neural circuit for memory retrieval itself.

A group of University of Tokyo researchers and their collaborators identified for the first time in monkeys the neural substrate, or functional units in the nervous system, underlying the ability, known as metamemory, that enables objective self-evaluation of memory. The group also demonstrated that the neural substrate for metamemory is distinct from that for memory recollection.

Metamemory is a sophisticated mental process that requires introspective evaluation of one’s own cognitive processes, and therefore had long thought to be unique to humans. However, it remained unclear how our brain produced metamemory and whether its neural substrates were separate from those for memory per se because of the difficulty in studying the causal relationship between brain activity and behavior in humans.

The research group led by Japan Society for the Promotion of Science postdoctoral fellow Kentaro Miyamoto and Visiting Professor Yasushi Miyashita (concurrently project professor at Juntendo University Graduate School of Medicine) at the University of Tokyo Graduate School of Medicine developed metamemory tasks for macaque monkeys, a species closely related to humans, and succeeded in establishing an objective and behavioral method for measuring to what extent the monkeys are confident about their own memory. While the monkeys were performing the tasks, the scientists measured the primates’ neural activity using functional magnetic resonance imaging (fMRI) and found that a focal region in the cerebral cortex known as area 9 in the lateral prefrontal cortex was activated during metamemory processing. Moreover, they injected a chemical (GABA-A receptor agonist muscimol) to temporally suppress neuronal activities in this region and found impairment of metamemory (i.e., the performance of confidence judgment on memory), but not memory performance itself.

The current outcome holds promise of contributing to the development of effective education methods based on brain functions, and the establishment of diagnostic and treatment procedures for higher brain dysfunction caused by malfunction in the prefrontal cortex, in the future.

“It is surprising that the brain of non-linguistic monkeys has a neural circuit specializing in metamemory for introspection,” says Miyamoto. He continues, “Future study will be directed at unraveling the evolutional origin of higher thought and reasoning, which until now were believed as being unique to humans.”