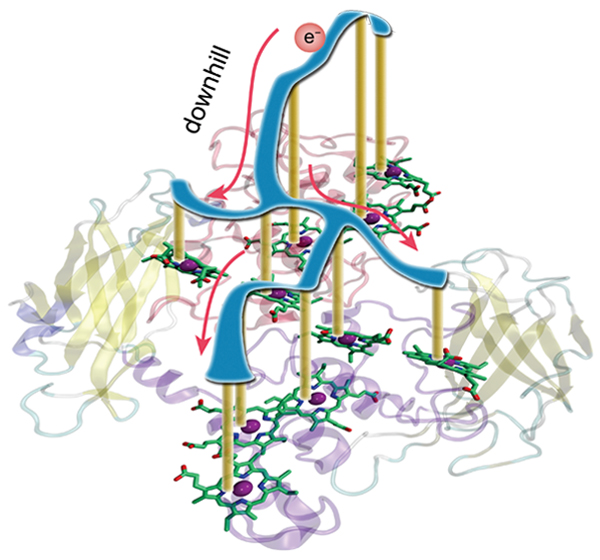 Rendering of electron transfer pathway in MtrF protein
An electron is transferred between 10 iron-containing molecules called hemes bound to a protein. The oxidation-reduction potential (yellow) of each heme is shown schematically. The electron is likely to move downward along the potential’s surface (blue).
© 2017 Hiroshi C. Watanabe.

Researchers at the University of Tokyo identified the pathways for transferring electrons in the bacterial protein MtrF by ascertaining through computer simulation the protein's detailed molecular structure involved in anaerobic respiration, the process by which bacteria and other organisms produce energy in environments without oxygen.

While many living organisms, including humans, produce energy (ATP) for life activities through respiration that requires reduction, the transfer of electrons to oxygen molecules, some bacteria living in environments without oxygen yield energy by transferring electrons to a metal-oxide mineral. These bacteria are thus transporting electrons over a long distance, from inside the cell to the metal oxides outside it. Scientists already know that various proteins mediate this long-range electron transfer; moreover, the molecular structure of one of the proteins, MtrF, was revealed in recent years. However, although some research groups have simulated the electron transfer pathways based on studies published on the protein's structure, their detailed mechanism remains unclear.

The research group led by Professor Hiroshi Ishikita and Research Associate Hiroshi Watanabe at the Research Center for Advanced Science and Technology at the University of Tokyo found that the published data on part of the MtrF structure contained an inaccuracy, and calculated the accurate structure through simulation with a supercomputer. The simulations further revealed new electron transfer pathways, apart from the ones previously proposed. In addition, the group reported that the protein possesses a well-designed mechanism enabling effective electron transfer.

"MtrF is embedded with 10 iron-containing molecules called hemes forming a pathway that transfers electrons from one end of the protein to the other. You could say this is a natural electronic device, and I was excited wondering about the kind of electronic properties MtrF possesses," says Ishikita. He continues, "Although the electron transfer pathway's shape appears symmetrical at first glance, our study revealed that under certain conditions the electron is likely to be transferred unidirectionally like a diode."