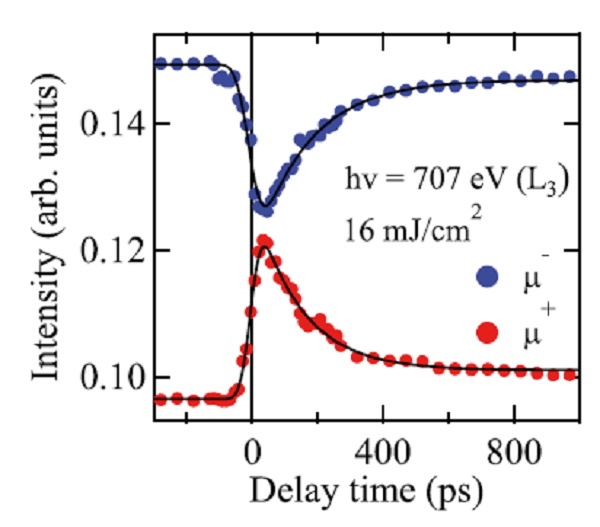 Researchers at the University of Tokyo and their collaborators succeeded in observing ultrafast spin dynamics in iron-platinum thin films at Japan’s SPring-8 BL07LSU synchrotron facility located in the west-central part of the country. This experimental setup is the only one among Japanese synchrotron facilities, and the epoch-making outcome will likely lead to future systematic studies of spin dynamics in magnetic materials.

With recent innovations in technology, measurements made through magnetic circular dichroism—a method performed in synchrotron facilities using soft x-rays (x-rays with a relatively long wavelength)—have made it possible to determine magnetization of constituent atoms, by element, in small-volume samples such as thin films and nanostructures; thus, such advances are paving the way not only for material science applications, but also leading to those for future electronic devices employing spintronics (electronics involving both electric charge and spin). In spintronics, spins are controlled by laser and other light sources rather than magnetic fields because precisely applying large magnetic fields by electric current just to the small parts of faster devices to control spins, is very difficult.

In the current study led by Project Researcher Kou Takubo and Associate Professor Hiroki Wadati of the Institute for Solid State Physics (ISSP) at the University of Tokyo, the group used iron-platinum thin films, a ferromagnetic-insulating alloy, fabricated by researchers at Tohoku University, and succeeded in measuring time-resolved magnetic circular dichroism—achieved through irradiating a material with laser to cause a phenomenon, then immediately irradiating it with synchrotron radiation soft x-rays to take magnetic circular dichroism measurements—at ISSP’s BL07LSU beamline (a set of experimental instruments) at the SPring-8 synchrotron facility.

The team found through taking measurements of varying laser intensities that there is a distinct threshold of laser intensity necessary for demagnetization. Such a threshold is a typical signature of photo-induced phase transition. With this measurement, the scientists succeeded in observing ultrafast photo-induced demagnetization within 50 picoseconds (50-trillionths of a second), the time resolution of synchrotron x-rays. From the present results, we can expect to observe element-specific spin dynamics in alloys with more than one magnetic element, and to clarify the mechanism not only of magnetization but also of magnetization reversal by laser.

"This is the first step toward spin dynamics research in ISSP's SPring-8 BL07LSU beamline," says Wadati. He continues, "We expect the research will lead to free manipulation of spins, including laser-induced magnetization reversal. Our aim is to study spin dynamics in magnetic materials systematically by using synchrotron x-rays and x-ray free electron lasers."