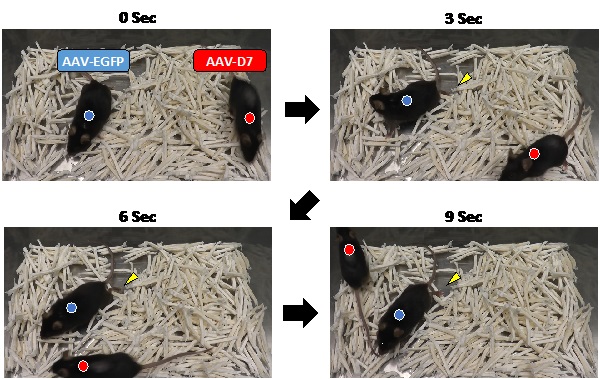 Improved motor activity of ALS mouse
Therapeutic administration of a virus vector for DOK7 expression, AAV-D7, improved the locomotion of an ALS mouse (red circle). By contrast, a mouse treated with a control vector, AAV-EGFP (blue circle), exhibited impaired mobility by dragging its hind limbs (yellow arrow heads), a sign of paralysis. The photos indicate positions of the mice at three-second intervals at 150 days after birth. Both mice developed the disease when they were 115 days old.
© 2017 Sadanori Miyoshi and Yuji Yamanashi.

A group of University of Tokyo researchers and their collaborators have shown that enlarging the neuromuscular junctions of mice with ALS-like symptoms through a treatment method the team developed improved the animals’ condition and prolonged their lives. The current outcome presents a new approach for treating the motor neuron disease, with no known cure, through gene therapy and other methods to enlarge neuromuscular junctions after ALS onset.

Our motor functions require rigorous control over skeletal muscle contractions by motor neurons. ALS—amyotrophic lateral sclerosis, also known as Lou Gehrig’s disease—is a neurodegenerative disorder of motor neurons characterized by the severe deterioration of muscle. The degeneration and loss of neuromuscular junctions (NMJs)—the essential chemical synapses that transfer control signals from motor neurons to skeletal muscles—lead to the loss of motor function, including our ability to breathe.

The research group led by Professor Yuji Yamanashi and then-graduate student Sadanori Miyoshi at the Institute of Medical Science at the University of Tokyo and its collaborators had previously discovered that the muscle protein Dok-7 is essential for forming NMJs, and mutations in the related human DOK7 gene cause DOK7 myasthenia, a hereditary disease characterized by a defective NMJ structure. The researchers had further established that the motor activity and life spans of mice with DOK7 myasthenia-like symptoms, as well as those with symptoms similar to a certain type of muscular dystrophy, were enhanced by enlarging NMJs following disease onset, which they verified with gene therapy involving the administration of a carrier, or virus vector, for DOK7 expression in target cells and tissues.

NMJs have recently emerged as attractive therapeutic targets for treating neurodegenerative diseases like ALS and age-related muscle weakness, including sarcopenia, in addition to muscular disorders, because studies have shown that degeneration of motor nerve terminals—characterized by size reduction, cutting of nerve connections, and other disruptions—at the NMJs precedes the onset of disease; however, the potential of NMJ-targeted therapies was still unknown.

In the current study, the research group found that DOK7 gene therapy, the NMJ enlargement method they developed, enhanced motor activity and life span in ALS mice by suppressing the size reduction of motor nerve terminals and subsequent denervation at NMJs, and stemming the progression of muscle atrophy. The findings suggest that the therapeutic approach aimed at enlarging NMJs might be useful in developing treatments for ALS and other types of motor neuron diseases associated with abnormal development of NMJs, as well as age-related ailments like sarcopenia, which are likely to become a growing concern in aging societies.

"This study originates from a finding in basic, biological research, which had no particular disorder as a target; the current outcome was obtained through the participation of numerous collaborators—both basic researchers and clinical researchers—and the huge support from multiple public grants," says Yamanashi. He continues, "By acknowledging the huge contributions of our collaborators and supporters, we would like to do our best to understand the causes of ALS and other intractable disorders, with the aim of developing effective therapies."