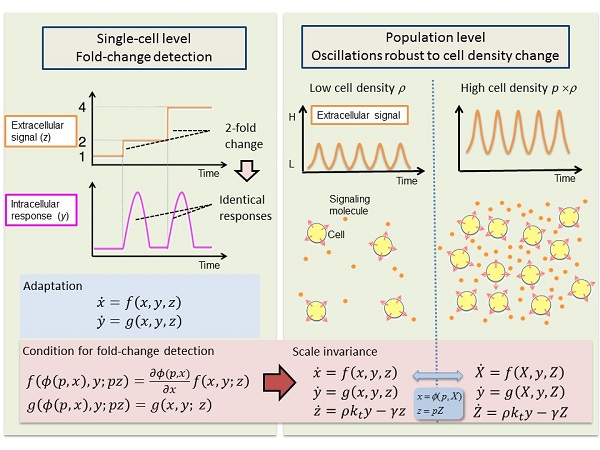 University of Tokyo researchers have demonstrated that the single-cell level response of the soil-dwelling social amoeba Dictyostelium, also known as cellular slime mold, to cell-to-cell communication molecules is based not so much on the absolute change, but rather on recognizing the change in the ratio (fold-change detection) in the concentration of the molecules; and that this property allows Dictyostelium to oscillate collectively when organizing into multicellular forms at various densities. The current finding holds promise in advancing our basic understanding of the robustness of intercellular communications for infection, immune response, embryonic development, and other biological systems in which the absolute concentration of extracellular signaling molecules can become uncertain.

Living organisms have the propensity to keep growing and developing notwithstanding small changes in the environment. Scientists refer to this phenomenon as robustness and it is one of the distinct features that separates living systems from nonliving materials and artificial machines.

The research group led by Associate Professor Satoshi Sawai at the Graduate School of Arts and Sciences at the University of Tokyo set out to find out how Dictyostelium—an organism known as a social amoeba that shows conditional multicellularity—can communicate with each other even under conditions of contrasting cell density. According to the standard theory laid out 30 years ago by Albert Goldbeter at the Free University of Brussels and others, cell-to-cell signaling in amoeba populations should be restricted to a narrow window of cell densities—a large discrepancy from actual observations. Cell-to-cell signaling plays a pivotal role in cellular and tissue organization. Cells often detect specific signaling molecules released by other cells, which in turn induces them to secrete or break down similar molecules. This population-level synthesis and degradation of molecules promotes the coordinated activity of cell migration, proliferation, and differentiation. A solid communications medium analogous to phone cables seems ideal for establishing the smooth transmission of information between cells. However, as cells most often use freely diffusing molecules in extracellular fluid for communications, the molecules’ concentration varies greatly according to changes in the environment like cell densities, and the presence of diluting or degrading factors.

In some organisms, cellular communications are established even under such uncertain conditions, but the mechanism by which this is achieved remained poorly understood. Through quantitative live-cell imaging with a fluorescence microscope of single cell-level response to signaling molecules, the research group revealed that the Dictyostelium cells’ response remains identical under various background concentrations of stimulus as long as the fold change is the same—that is, a change in the stimulation level from 1 to 2 produces the same result as that from 2 to 4, both representing a twofold change, although the change difference varies. Mathematical analysis shows that this fold-change dependence ensures population-level cooperative phenomena to exhibit the same dynamics regardless of cell density. Since similar fold-change detection is well known in human sensory systems, the present results suggest a universal feature of signal processing across many levels of the biological hierarchy.

"I was blessed to have met talented graduate students Keita Kamino and Yohei Kondo, co-authors of the current study, who were interested in applying their mathematical and physical science talent to biological problems. It looked rather complicated at first, involving tens of thousands of cells that collectively create unpredictable patterns in space and time, but what it boiled down to was a rather simple mathematical principle that underpins the robustness," says Sawai. He continues, "This is one of the rare examples in which this kind of simple mathematical principle was demonstrated in biology. We hope that the finding will inspire and stimulate studies in other biological systems and deepen our knowledge of universality in biological phenomena."

Department of Basic Science, Graduate School of Arts and Sciences

Department of Integrated Science, College of Arts and Sciences