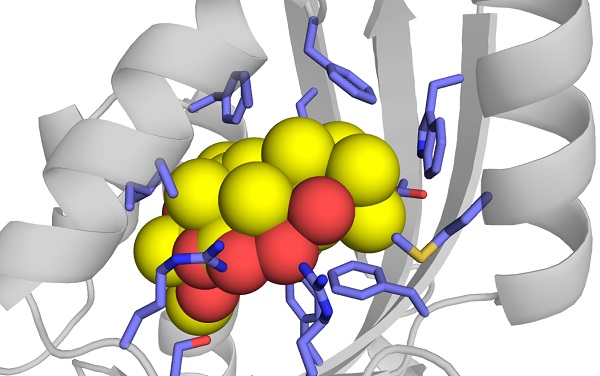 Researchers at the University of Tokyo have revealed the three-dimensional structure and mechanism of enzymes called isomerases—catalyzing the rearrangement of molecules in a compound to create an isomer, a compound composed of equal proportions of the same elements, but whose atoms are arranged differently—that are involved in the biosynthesis of complex natural products. The current results hold promise of leading to the development of new molecular scaffolds incorporating enzymatic reactions, which would serve as a framework for designing drugs.

Scientists have been scouring Mother Nature, with its abundance of compounds offering great structural diversity, as a valuable source for drug discovery. Among them, a group of natural compounds called meroterpenoids, found in plants and microorganisms, is known for its diverse bioactivity—the effects it has on living organisms. The biochemical enzymes responsible for biosynthesis—the formation of chemical compounds by living organisms—in meroterpenoids catalyzes a dramatic increase in the structural diversity of the molecules.

In the current study, the research group led by then-Assistant Professor Takahiro Mori and Professor Ikuro Abe at the University of Tokyo's Graduate School of Pharmaceutical Sciences focused on a protein with a molecular weight of about 15 kilodaltons involved in biosynthesis of fungal meroterpenoids, whose function was not known. The group revealed that the protein, an enzyme, catalyzed not only the conversion of a compound into an isomer, but also catalyzed a sequential hydrolysis reaction, by which chemical compounds split into other compounds in reaction to water. The researchers also obtained the crystal, or 3-D, structures of the isomerases with various substrates and product analogs to reveal the detailed mechanism for catalysis of the unique sequential reaction. Furthermore, they succeeded in producing a series of functionally modified synthetic enzymes, such as a three-dimensional inversion of a compound or those equipped with a novel structural compound derived from a synthetic hydrolysis reaction, unlike that in wild-type enzymes found in nature, by introducing an amino acid mutation to the enzyme's crystal structure.

"In this study, we analyzed and revealed the enzymatic mechanism involved in the biosynthesis of a complex natural product," says Abe. He continues, "We hope our results will pave the way for drug design methods incorporating biocatalysts for catalyzing reactions that are difficult to synthesize organically."