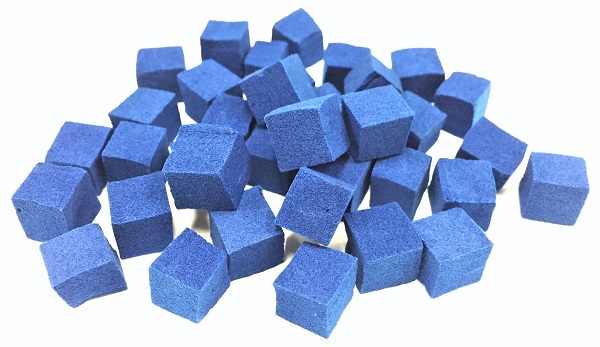 By combining the same Prussian blue pigment used in the works of popular Edo-period artist Hokusai and cellulose nanofiber, a raw material of paper, a University of Tokyo research team succeeded in synthesizing compound nanoparticles, comprising organic and inorganic substances. This new class of organic/inorganic composite nanoparticles is able to selectively adsorb, or collect on the surface, radioactive cesium. The team subsequently developed sponges from these nanoparticles that proved highly effective in decontaminating the water and soil in Fukushima Prefecture exposed to radioactivity following the nuclear accident there in March 2011.

Removing radioactive materials such as cesium-134 and -137 from contaminated seawater or soil is not an easy job. First of all, a huge amount of similar substances with competing functions has to be removed from the area, an extremely difficult task. Prussian blue (ferric hexacyanoferrate) has a jungle gym-like colloidal structure, and the size of its single cubic orifice, or opening, is a near-perfect match to the size of cesium ions; therefore, it is prescribed as medication for patients exposed to radiation for selectively adsorbing cesium. However, as Prussian blue is highly attracted to water, recovering it becomes highly difficult once it is dissolved into the environment; for this reason, its use in the field for decontamination has been limited.

Taking a hint from the Prussian blue in Hokusai’s woodblock prints not losing their color even when getting wet from rain, the team led by Professor Ichiro Sakata and Project Professor Bunshi Fugetsu at the University of Tokyo’s Nanotechnology Innovation Research Unit at the Policy Alternatives Research Institute, and Project Researcher Adavan Kiliyankil Vipin at the Graduate School of Engineering developed an insoluble nanoparticle obtained from combining cellulose and Prussian blue—Hokusai had in fact formed a chemical bond in his handling of Prussian blue and paper (cellulose).

The scientists created this cellulose-Prussian blue combined nanoparticle by first preparing cellulose nanofibers using a process called TEMPO oxidization and securing ferric ions (III) onto them, then introduced a certain amount of hexacyanoferrate, which adhered to Prussian blue nanoparticles with a diameter ranging from 5–10 nanometers. The nanoparticles obtained in this way were highly resistant to water, and moreover, were capable of adsorbing 139 mg of radioactive cesium ion per gram.

Field studies on soil decontamination in Fukushima have been underway since last year. A highly effective approach has been to sow and allow plant seeds to germinate inside the sponge made from the nanoparticles, then getting the plants' roots to take up cesium ions from the soil to the sponge. Water can significantly shorten decontamination times compared to soil, which usually requires extracting cesium from it with a solvent.

It has been more than six years since the radioactive fallout from a series of accidents at the Fukushima Daiichi nuclear power plant following the giant earthquake and tsunami in northeastern Japan. Decontamination with the cellulose nanofiber-Prussian blue compound can lead to new solutions for contamination in disaster-stricken areas.

"I was pondering about how Prussian blue immediately gets dissolved in water when I happened upon a Hokusai woodblock print, and how the indigo color remained firmly set in the paper, without bleeding, even after all these years," reflects Fugetsu. He continues, "That revelation provided a clue for a solution."

"The amount of research on cesium decontamination increased after the Chernobyl nuclear power plant accident, but a lot of the studies were limited to being academic and insufficient for practical application in Fukushima," says Vipin. He adds, "Our research offers practical applications and has high potential for decontamination on an industrial scale not only in Fukushima but also in other cesium-contaminated areas."

Department of Technology Management for Innovation, Graduate School of Engineering

Laboratory of Bionanomaterials and Cellulose Sciences, Graduate School of Agricultural and Life Sciences