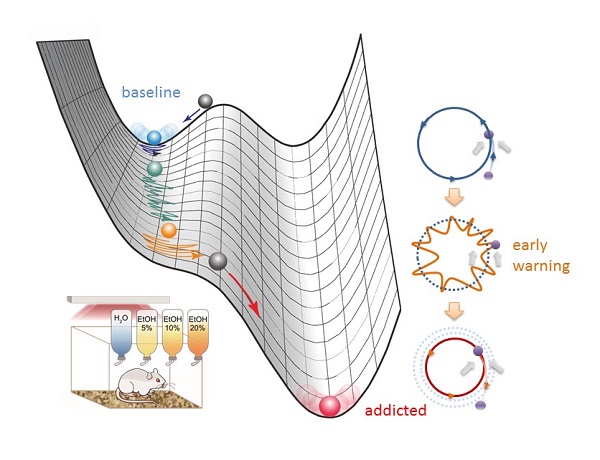 Dynamical state transition into alcohol addiction in rats
The illustration at left depicts the state transition of a rat's biological system from a stable state prior to alcohol deprivation (blue), to an unstable state during deprivation (orange), to an excessive-drinking state following reintroduction of alcohol (red). The limit circles, at right, reflect circadian locomotor activity at baseline (stable), vicinity of tipping point (unstable), and addicted (stable) states.
© 2017 Catarina Luis, Ikuhiro Yamaguchi, Yoshiharu Yamamoto.

A group of researchers at the University of Tokyo and their collaborators have revealed for the first time evidence of a dynamic transition in health state at disease onset using rats.

The idea of so-called dynamical disease that regards disease onset as the dynamic transition of the body's internal state and the study of such disease dynamics have been drawing attention for their potential to inform the prediction of transitions into or between disease states. However, these ideas have not yet come to fruition or translated into clinical applications due to the lack of appropriate data and corresponding analytical techniques for making such predictions.

The research group led by Professor Yoshiharu Yamamoto and Researcher Jerome Foo at the University of Tokyo's Graduate School of Education used the well-established alcohol deprivation effect (ADE) model, in which rats were allowed to consume alcohol freely for an initial period, followed by deprivation and subsequent reintroduction of the substance, to induce relapse-like excessive drinking, as an example of disease onset.

Over a period of 14 weeks (8 baseline, 2 deprivation, 4 reintroduction), the researchers acquired continuous and high-resolution intensive longitudinal data (ILD) of drinking behavior and locomotor activity, and analyzed the data using a multiscale computational approach. They found that transitions into addictive drinking behavior were preceded by predictive "early warning signals," such as unstable drinking patterns and instability in locomotor circadian (approximately 24-hour cycle) rhythms and a resultant increase in low-frequency ultradian rhythms (a few to several hour diurnal cycles) during the first week of the deprivation period.

The current findings are particularly relevant today, in which rapid developments in wearable and mobile biomedical sensing technology allow us to gather massive amounts of such biomedical intensive longitudinal data. The analytical framework developed in the present study has the potential of contributing to our understanding of disease onset in humans and forecasting changes into different stages of disease, and can be directly translated to the clinical arena through the appropriate use of these technologies for disease prevention.

"We believe that our approach provides a significant step forward for biomedical and biophysical scientists who perceive disease onset as the dynamical transition of the body's internal state," says Yamamoto. He continues, "Rigorous treatment of intensive longitudinal data, like in our proposed framework, may illuminate future aspects of biomedicine and health care in the IoT (internet of things) era."

The current research outcome is the result of a collaboration with researchers at the Max Planck Institute for Biological Cybernetics and the Central Institute of Mental Health in Germany.