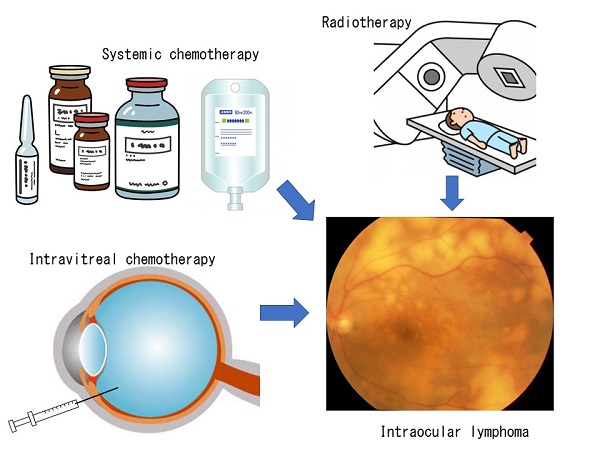 A University of Tokyo research group has found that a new treatment regimen is effective in curtailing the high rate of an intractable eye disease, intraocular lymphoma, from spreading to the brain. This new therapy promises to greatly improve the prognosis of the disease and is expected to become a new treatment protocol in the future.

Intraocular lymphoma is a malignant tumor of immune cells called lymphocytes that occurs in the eyeball. As it shares similar symptoms with inflammatory eye diseases like uveitis when detected in the eye, it is sometimes confused with these maladies. The number of patients with intraocular lymphoma has risen sharply in recent years. The high incidence of metastasis, the spread of the cancer from the eye to the brain through the dissemination of tumorous cells, is a problem presented by this disease—dispersal of cancer cells to the brain occurs in 65-80 percent of cases within 29 months after the lesion takes place in the eye. Among eye diseases, intraocular lymphoma has the worst survival prognosis.

In the current study, the research group led by Associate Professor Toshikatsu Kaburaki, Lecturer Kazuki Taoka, and Assistant Professor Hideomi Yamashita at the University of Tokyo Hospital treated patients, diagnosed with intraocular lymphoma and aged 75 years or younger, with a treatment protocol combining an injection in the eye of a drug (methotrexate), systemic chemotherapy (with rituximab, methotrexate, vincristine, procarbazine, and cytarabine)—treatment, with chemical agents and drugs, affecting the entire body—and preventive low-dose whole-brain radiation therapy. The group found that performing the treatment reduced the dissemination of cancer cells to the brain to 12 percent of cases in 4 years. This finding shows that aggressive systemic chemotherapy and preventive radiotherapy could greatly improve the prognosis of the disease.

"Intraocular malignant lymphoma, although a disease of the eye, is intractable and life-threatening. Even though there have been various debates on how to treat it, there was no silver bullet," says Kaburaki. He continues, "I hope that this treatment protocol would become the impetus for breaking down the poor prognosis of this disease."