How does crystal gel form? Common mechanism sheds light on the origin of cold rain 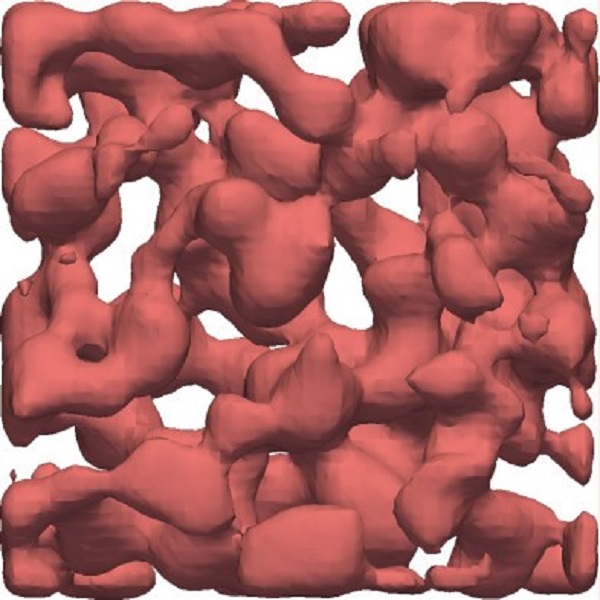 3D structure of a crystal gel
The characteristics of a crystal gel's 3D network structure are easy to perceive when smoothing out the colloids utilizing a mathematical function called the Gaussian field.
© 2017 Hideyo Tsurusawa, John Russo, Mathieu Leocmach, and Hajime Tanaka.

Researchers at the University of Tokyo have revealed—through three-dimensional observations in real time using a high-resolution imaging technique called confocal laser microscopy—the elementary process of crystal-gel formation, in which colloids (2-micron-sized solid particles) initially dispersed homogeneously in a liquid attract to each other, aggregate, and form a crystal network.

A colloidal gel is typically found in a solid state, in which colloidal particles are clumped together and captured in a random configuration, but scientists have known that under certain conditions, a gel forms from an interconnected network of crystals. However, the mechanism and conditions giving rise to such a peculiar gel state remained unclear.

The research group led by Professor Hajime Tanaka, then-graduate student Hideyo Tsurusawa, and then-Project Research Associate John Russo (currently lecturer at the University of Bristol in the UK) at the Institute of Industrial Science at the University of Tokyo, and Dr. Mathieu Leocmach at the University of Lyon in France, succeeded in observing the dynamic process of crystal-gel formation at the microscopic level for the first time, thus revealing its elementary process—first, a colloid-rich liquid network is formed from the phase separation into a high-colloid liquid phase and low-colloid gas phase; then crystal nuclei, the tiny crystals that appear at the onset of crystallization, form within the liquid phase, and continue growing until they reach the liquid-gas interface at the liquid network's surface. Once the crystals make contact with the gas, the colloidal particles in the liquid phase evaporate and those in the gas phase condense on the crystal surface due to the higher saturated vapor pressure of the liquid phase compared to that of the solid phase. The group found that this mechanism is an important process responsible for the growth of crystals. It is in fact the same phenomenon as the so-called Bergeron process, in which ice crystals grow rapidly in clouds containing a mixture of supercooled water and ice crystals; thus, this study could be regarded as the first case of the microscopic observation of the elementary process of cold-rain formation. According to this mechanism, crystal gels formed in this fashion have a smooth surface, and have a large surface-volume ratio due to their porosity. Therefore, the applications of such a structure when formed from metallic and other types of atoms are likely to have a huge impact.

The research group also provides a set of physical guidelines on the necessary conditions for realizing this process. Porous crystals have so far been formed by a two-step process, involving phase separation followed by the removal of one of the phases, such as by chemical etching. The newly discovered process allows the formation of porous crystals in a single step, pointing to its application in the design principles underlying the development of new porous-crystalline materials in the future.

"Until now, it was unclear how a crystalline gel state is formed. Our study shows that the key mechanism of crystal-gel formation is the same as that of ice-crystal formation in clouds," says Tanaka. He continues, "I am intrigued by how nature is governed by the law of physics, when apparently unrelated fields, colloidal physics and science of clouds and rain, share a common mechanism."