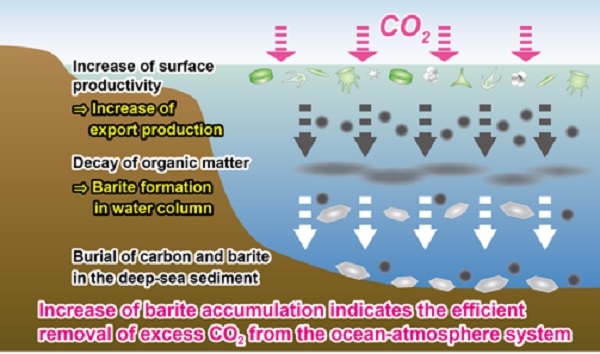 Schematic diagram illustrating marine productivity feedback
During global warming events called hyperthermals, the productivity of plankton in the ocean surface layer increases and carbon dioxide (CO2) in the ocean–atmosphere system is exported to the seafloor as organic matter, a process known as export productivity. A portion of the sinking organic matter decomposes and barite, a mineral consisting of barium sulfate, forms in the water column. The increased export productivity thus results in an increase of carbon and barite buried in deep-sea sediment. This mechanism efficiently removes the excess carbon, or greenhouse gas, from the ocean–atmosphere system. Consequently, the CO2 level in the atmosphere decreases and the climate returns to its original state.
© 2017 Kazutaka Yasukawa.

A research group at the University of Tokyo has shown that increased marine productivity brought an end to the rapid and transient global warming events in the early Eocene period, occurring about 56 million to 52 million years ago, by effectively removing carbon dioxide in the atmosphere. This outcome should prove helpful in understanding how human-made CO2 emissions impact the Earth's environment and geochemical cycles, the paths in the Earth's interior and on its surface that elements follow, and how the Earth system recovers to its original state in a timescale lasting several tens of thousands of years or longer.

The early Eocene is the warmest period in the Cenozoic era, dating from the extinction of dinosaurs 66 million years ago to the present. Overlapping the warm climate were rapid and transient global warming events called hyperthermals that occurred repeatedly. Rapid and massive injections of greenhouse gases into the ocean–atmosphere system are thought to have caused the hyperthermals. Although the footprints of hyperthermals have been reported from other parts of the globe, including the Pacific and Atlantic oceans and Europe and North America, very few geologic records have been found so far in the Indian Ocean.

The research group of Assistant Professor Kazutaka Yasukawa and Professor Yasuhiro Kato at the University of Tokyo's Graduate School of Engineering and their collaborators collected deep-sea sediment samples from the drilling cores gathered earlier in the Indian Ocean by the Ocean Drilling Program research expeditions. Based on the results from chemical analyses of these samples, the researchers identified multiple excursions in carbon isotope ratios, a clear indication of the Eocene hyperthermals. These were the first geologic record of the hyperthermals in the Indian Ocean with a high time-resolution. Furthermore, the group analyzed the geochemical data statistically by using a method known as independent component analysis. The result from this analysis indicated that the increased marine productivity efficiently removed CO2 from the ocean–atmosphere system, thereby bringing an end to the global warming events in the hyperthermals, a process called the Earth system's negative feedback.

"We, human beings, are now emitting a huge amount of greenhouse gases. To accurately forecast their impact on the Earth's environment on a timescale spanning several tens of thousands of years or longer is very difficult. Therefore, interpreting the records of past climate changes provides a crucial key for grasping future trends," says Yasukawa. He continues, "By better understanding the natural recovery mechanisms from global warming, I hope to find a clue for what we should do within the timescale of human society."