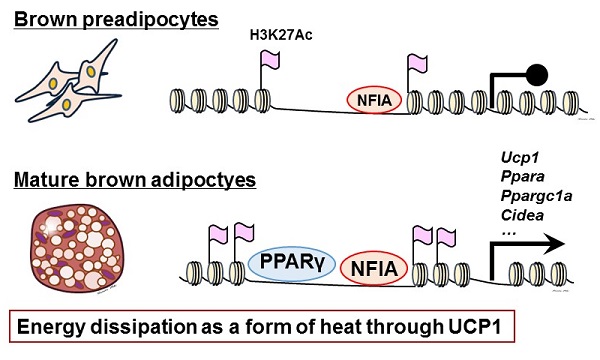 Evidence accumulated in recent years suggests that human adults have not only white adipose tissue (WAT), normal fat tissue also known as white fat that stores energy, too much of which contributes to obesity; but also brown adipose tissue (BAT), which burns energy and produces heat through a protein called uncoupling protein-1 (UCP1) in mitochondria, the intercellular structures that produce energy used by cells. Scientists have found that human BAT activity and body mass index, an indicator of obesity, are inversely correlated, and that the amount of BAT declines with age. Therefore, increasing the amount of BAT or activating its function could have promising implications for a new strategy for treating obesity.

In the current study, the research group led by Professor Takashi Kadowaki, Associate Professor Toshimasa Yamauchi, Project Associate Professor Hironori Waki, and Project Researcher Yuta Hiraike at the University of Tokyo’s Graduate School of Medicine identified NFIA as a transcriptional regulator of brown fat through genome-wide open chromatin analysis in mouse BAT and WAT. Previously, scientists believed that just a transcription factor, peroxisome proliferator-activated receptor γ (PPARγ), was needed for fat cells to differentiate, serving as a “master transcriptional regulator of adipogenesis.” In the current study, researchers have shown that the binding of NFIA to DNA precedes and facilitates the binding of PPARγ, leading to synergistic activation of the BAT gene program. Therefore, PPARγ alone cannot fully activate the BAT gene program, and NFIA is indispensable for full activation.

Mice lacking NFIA show a severely impaired BAT gene program in BAT, while introducing NFIA into progenitor of muscle cells or white fat cells activated the BAT gene program. Moreover, the researchers found that expression of NFIA in human adults was higher in BAT than in WAT.

These results suggest that increasing the expression or activity of NFIA could lead to a novel therapy for treating obesity, metabolic syndrome, and type 2 diabetes by increasing the amount of energy burned, rather than decreasing its intake.

“Currently, treatment of obesity depends largely on modifying lifestyle habits, including diet and exercise. Besides, existing treatments for obesity, regardless of whether with drugs or through surgery, are all based on reducing energy intake,” says Kadowaki. He continues, “Our goal is to develop a novel therapy for obesity based on the concept of increasing energy dissipation by up-regulating NFIA and activating BAT. We remain committed in working hard to make progress through our research.”

Department of Diabetes and Metabolic Diseases, University of Tokyo Hospital