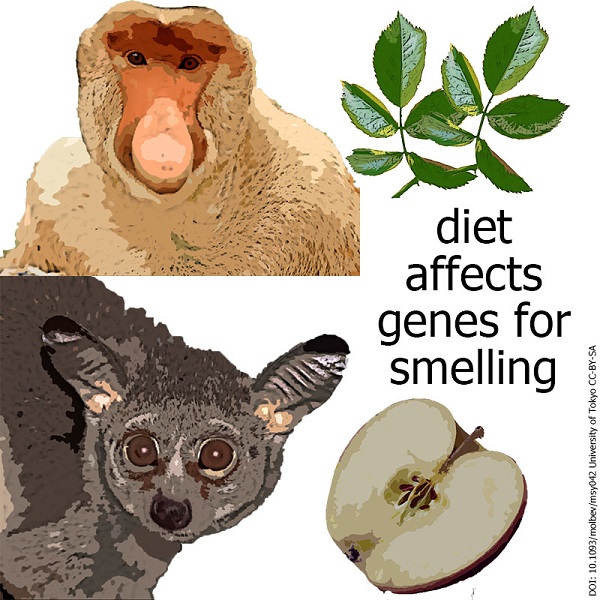 Needing to smell different food sources may have been the evolutionary force causing certain primates to keep genes for detecting many different odors. A genetic study comparing the number of odor detection genes in 24 primate species, including humans, revealed that the timing of the loss of those genes matches a change in diet approximately 15 million years ago.

Professor Kazushige Touhara is an expert in odor-based communication and leads the laboratory that completed the recent study at the University of Tokyo. "Our research includes chemical communication between individuals of the same species, and also between different species. We really want to understand if olfactory communication is important in human communities, and evolutionary genomic studies of primates can help us towards that goal," said Touhara.

The research team scoured the genomes of primates from across the evolutionary tree to search for differences in the number of genes responsible for odor detection. Specifically, they counted genes that encode olfactory receptors, proteins that identify scented chemicals and are embedded in the surface of nerves lining the inside of the nose.

Niimura discovered that species within the wet-nosed suborder of primates known for low vision (the strepsirrhines, including lemurs and bushbabies, with wet noses reminiscent of the noses of dogs or cats) have between 600-800 genes encoding olfactory receptors. That is twice the average number of olfactory receptor genes within species of the dry-nosed suborder of primates, known for stronger vision (the haplorhines, including New and Old World simian monkeys, apes, and humans).

"But when we perform more refined statistical analysis, we noticed that within the suborder of dry-nosed primates with stronger vision, there are lineages with different numbers of olfactory receptor genes. Some other factor besides vision must also influence olfactory receptor evolution," said Niimura.

Niimura statistically tracked if the number of olfactory genes was linked to daytime or nighttime activity patterns, or differences in color vision abilities. Only feeding behavior was statistically related to the number of olfactory receptor genes. Some lineages opportunistically feed on any mature leaves, seeds, or unripe fruits while others selectively feed and use sniffing behavior to eat only ripe fruits.

"Within the dry-nosed suborder of primates, those differences in olfactory receptor gene number are connected to their differences in diet," said Niimura.

Researchers are not yet able to explain a separate loss of olfactory receptor genes in the Hominoid lineage, which includes humans and apes. All of these species have independently of each other lost additional olfactory genes over the past 10 million years, which may reveal shared environmental conditions or other factors.

"Previously it was thought that humans were weak smellers, but actually if you count the number of olfactory receptor genes, we are better than many other primates," said Niimura.

Researchers speculate that humans may have kept some olfactory genes due to our wide and varied diet. "Olfactory genes evolve very dynamically; some have remained stable while others have very rapidly been lost or duplicated to become new genes. Olfactory receptor genes are also the most common gene family within mammals, making up about five percent of the genome of mammalian species. So, olfactory genes are great for understanding evolution of genes generally," said Niimura.

This research was published in the April 10, 2018, issue of Molecular Biology and Evolution.