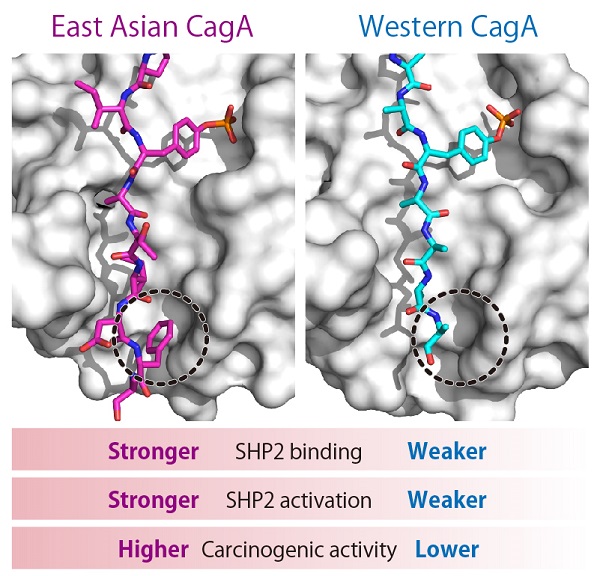 Structure of H. pylori CagA-SHP2 binding and carcinogenic activity
The illustration represents the three-dimensional structures of East Asian CagA (in magenta, left) and Western CagA (in cyan, right) complexed with SHP2 (gray, molecular surface representation model) that were determined in the study. The distinct structural difference between the two CagA molecules arising from a single amino acid variation (dashed circle) influences the activity of CagA to bind and deregulate SHP2, and thereby induce carcinogenesis.
© 2018 Hatakeyama Lab.

Researchers at the University of Tokyo uncovered the molecular mechanism driving the activation of a human cancer-causing protein by the CagA pathogenic effector in Helicobacter pylori bacterial strains prevalent in Japan and other East Asian countries, which underlie the higher rate of gastric cancer onset in these regions compared to other parts of the world. This finding promises to pave the way for the development of innovative therapeutics and preventive measures against gastric cancer.

East Asian countries, including Japan, China, and South Korea, are known for having the highest incidence of stomach cancer cases in the world. In particular, stomach cancer accounts for around 50,000 deaths a year in Japan. Most types of stomach cancers originate from a H. pylori infection, and its pathogenic effector CagA, a protein that mediates the onset of disease, plays a crucial role in the carcinogenic process. Intriguingly, epidemiological studies have indicated that East Asian CagA, a subtype of the CagA protein produced by H. pylori isolated in East Asia, is more involved in the development of stomach cancer compared to Western CagA, the standard CagA produced by H. pylori found around the world except East Asia. However, the molecular structural mechanisms responsible for evoking the distinct carcinogenic activities of these two CagA subtypes remained unknown.

In the present study, the research group led by Professor Masanori Hatakeyama and Research Associate Takeru Hayashi at the University of Tokyo Graduate School of Medicine, and Professor Toshiya Senda at the High Energy Accelerator Research Organization determined the three-dimensional atomic structures of CagA complexed with SHP2, its target cancer-causing protein, using a method called X-ray crystal structure analysis. The group determined by comparing the complex structures of the East Asian and Western CagA proteins that a variation in a single amino acid greatly influences CagA's capability to bind to SHP2. The scientists demonstrated through further analysis that the more robust SHP2 binding of East Asian CagA, compared to that of Western CagA, significantly augments the enzymatic activity of SHP2 and thereby strongly induces aberrant cellular signals that promote gastric cells to become cancerous. Collectively, the research elucidates for the first time the molecular structural mechanisms of how East Asian CagA exerts stronger carcinogenic activity amounting to the higher risk in Japan for developing stomach cancer.

"Japanese people infected with H. pylori are exposed to a higher risk for developing gastric cancer due to the difference in the single amino acid structure of CagA,"says Hatakeyama. He continues, "We expect our present work will lead to the innovative clinical application for prevention and early intervention of gastric cancer."