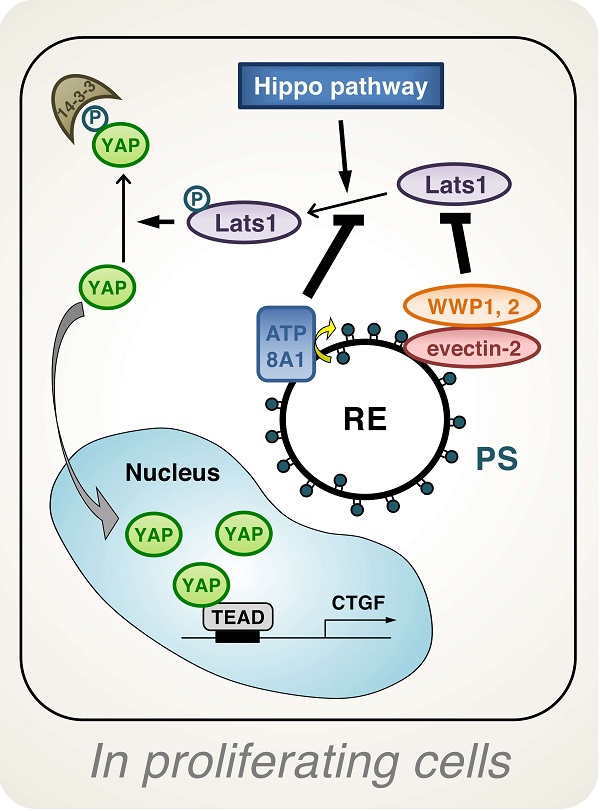 Endosomal phosphatdylserine is essential for YAP signaling
Phosphatidylserine (PS) in the inner layer (cytosolic leaflet) of lipid bilayer membranes of the recycling endosome (RE) regulates YAP activation in proliferating cells. By using a new method to find proteins nearest to phosphatidylserine, YAP and multiple proteins related to YAP signaling were identified. Knockdown of ATP8A1—an enzyme that transfers, or “flips,” lipids from the outer layer of the membrane's lipid bilayer to the inner layer—or evectin-2, a recycling endosome-resident protein, and masking of phosphatidylserine in the cytoplasmic leaflet of membranes, all suppress nuclear localization of YAP and YAP-dependent transcription. ATP8A1 knockdown increases the phosphorylated (activated) form of an enzyme called Lats1 that phosphorylates and inactivates YAP, whereas evectin-2 knockdown reduces the attachment of a protein called ubiquitin and increases the level of Lats1. The proliferation of YAP-dependent metastatic cancer cells is suppressed by the knockdown of ATP8A1 or evectin-2.
© 2018 Tatsuyuki Matsudaira, Kojiro Mukai.

Researchers at the University of Tokyo revealed that a phosphorous-containting lipid in the membrane plays a critical role in activating a protein involved in the transcription of genes regulating cell proliferation. This research outcome points to new drug targets for malignant cancer cells where this signaling pathway is involved.

The yes-associated protein, or YAP, is a recently discovered protein that accelerates the transcription of genes promoting cell growth, that has been shown to regulate the malignancy of various cancers. But how YAP is regulated is not fully understood.

In the current study, the research group led by Project Associate Professor Tomohiko Taguchi and Professor Hiroyuki Arai at the Graduate School of Pharmaceutical Sciences, the University of Tokyo, found that one of the factors regulating YAP is phosphatidylserine, a type of a phosphorous-containing fatty compound called a phospholipid, in tubular structures (organelles) known as recycling endosomes that send substances captured in the cell membrane back to the cell membrane. The group developed a new method to identify proteins surrounding phosphatidylserine and used it to reveal for the first time that the phospholipid regulates the Hippo-YAP signaling pathway, which is involved in the growth of cancer cells.

These results suggest a link between a membrane phospholipid and cell proliferation, and the scientists hope that applying their newly developed identification method to other phospholipids will help reveal other novel functions carried out by the phosphorous-containing fatty compounds.

"This study revealed the importance of membrane phospholipids of organelles in growth-promoting signaling and provides clues to the development of therapies for cancers," says Arai.

"The method we developed may be useful for revealing the functions of membrane phospholipids through the identification of proteins nearest to a specific phospholipid," adds Taguchi.