UTokyo launches first-of-its-kind Center for Global Commons Part of the University’s Vision 2020, the new center will focus on developing a shared international framework for protecting the Earth’s most vital systems

The University of Tokyo establishes the Center for Global Commons to squarely take on the unprecedented challenge of building a sustainable future for humanity and to steward the global commons – the vital earth systems which all life on the planet depend on. The Center will develop a science-based framework and practical decision-making tools such as the Global Commons Stewardship Index to be used internationally, aiming at mobilizing decision makers in business, policy making, citizens and academia towards collective actions to safeguard the global commons. 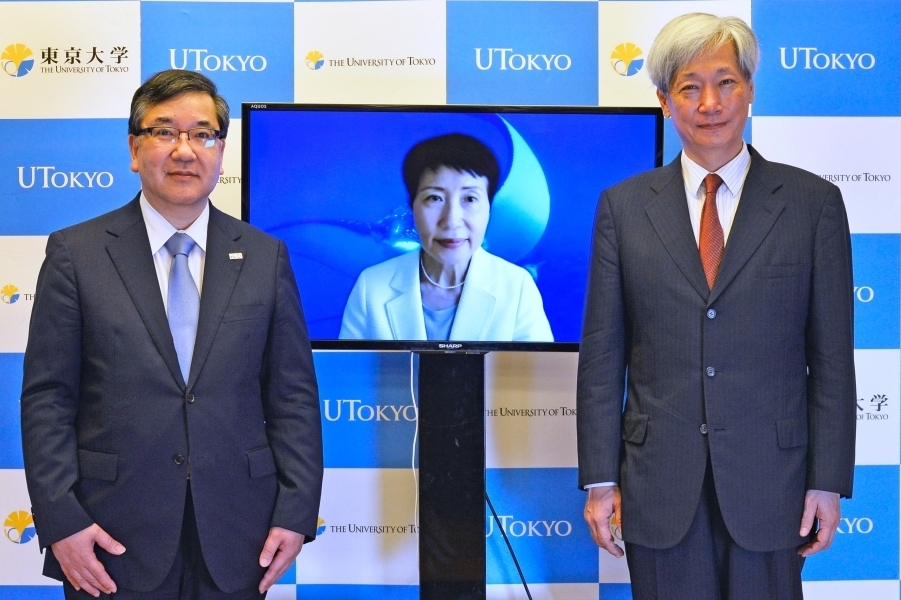 Vision of the Center for Global Commons

Humanity is at a critical juncture, either to find a way rapidly towards sustainable prosperity or, if we fail, to throw itself into a global environmental crisis that could spiral out of control. The scale and impact of human activity has been growing at an exponential rate. Rapid population growth, urbanization and a burgeoning middle class are together placing a huge strain on our “global commons” – the Earth systems such as the climate system, biodiversity, water, land, ocean and chemical cycle – that support all life on the planet, including our own. By the late 20th century, for the first time in geological history, human beings became the species to alter the Earth systems, putting our own future and that of other species at risk. Scientists now believe we have entered a new “geologic epoch”, the Anthropocene, and are transgressing some critical planetary boundaries to send the Earth into a place where we can hardly prosper.

COVID-19, as is the case with climate change, makes us question what it means to live in the Anthropocene. The risk of zoonotic diseases like COVID-19 increases due to the collision between human economic systems and natural systems, with food production, rampant deforestation and unplanned urbanization destroying the integrity of our natural ecosystems. It has revealed the weakness and fragility in economic and social systems, increased inequality, and challenged the way we prepare for risks, such as pandemics and climate change. It also shows that the current political system does not provide effective international collaboration to manage the global commons.

These unprecedented challenges to humanity require fundamental solutions to address their root causes. We need effective mechanisms to govern our global commons, restore the health of our earth systems and lay the foundations of prosperity for people and planet. In other words, we have to fundamentally transform the socio-economic systems such as energy, food, production/consumption, and urbanization. These systems, through dependency on fossil fuels, food production and consumption ignoring environmental load, linear mass-production/consumption, and unplanned urbanization, have been destroying the global commons, driving the entire Earth into collapse. The transformation has to be done quickly enough in time to bring the Earth and human society onto a sustainable pathway.

Although we are the first generation to alter the Earth systems and erode their functions, we can also be the generation to change the course and save humanity from disaster. For this purpose, we need to change the way we live, eat, consume, produce, and move around. New digital tools have the potential to accelerate these positive changes exponentially. And we need to aspire to design a new architecture of governing the global commons for a sustainable future.

Digital technology is our key advantage for enhancing the Global Commons Stewardship. As physical space and cyberspace are more interconnected now, the insight provided by digital technologies and data can accelerate the socio-economic system transformation to protect the global commons. On the other hand, however, mal-usage of the technology like fake news or cyber security failure may derail our efforts. We have to examine the interaction between physical and cyber spaces further and the Center will study how the “Cyber Global Commons” can contribute to the Global Commons Stewardship.

One key advantage that we have today is the power of our cyber-world. Our world is getting transformed through digital technologies. More and more decisions are made through the use of digital data, changing the way we invest and consume, and the very nature of capitalism. Currently, cyberspace is full of fake news, offensive behavior and trans-national cyber terrorism. In this new era when the real world and cyberspace are deeply connected, cyberspace can accelerate the needed transformation of our economic systems to safeguard the global commons, but it can also derail our efforts. We need to establish trust in cyberspace. Just as we need good governance of the physical global commons, we also need to learn how to be good stewards of the “Cyber Global Commons”.

Now is therefore the time to unite people across the world, creating governing mechanisms to steward the global commons, based on science, while also encouraging citizen-consumers, investors and policymakers to disrupt the current economic systems and reinvent new and truly sustainable ones. Together, we can put the humanity on track for the future we want.

Mission of the Center for Global Commons

In light of the vision above, the University of Tokyo has decided to establish the Center for Global Commons with conviction that the university should play a key role in driving socio-economic changes to solve ultimately the challenges we face through co-creation of new architecture of governing the global commons with various leaders beyond the academic world.

In pursuing this mission, the Center will take the lead in developing a shared intellectual framework for the global commons. This framework will be translated into integrated scenario pathways to achieve sustainable development within planetary boundaries by mid-century and into indices and benchmarks to guide actions by policymakers and business. As a result, the Center will contribute to accelerating the transformation of key socio-economic systems such as the energy system, the food system, the circular economy, and the urban system. And it will anchor its work in deepening the relationship between the physical and cyber commons.

The Center also aims at bringing Japan to the international discourse on the sustainability and the global commons. Japan, on the basis of its high economic, cultural and science/technology developmental capacity, has the opportunity and obligation to play a more active role in overcoming the global environmental crisis. As part of this effort, the Center will nurture talents to be active globally as champions of the Global Commons Stewardship.

Strategy for the Center for Global Commons

In its initial phase for the first three years, the Center will focus on the development of the “Global Commons Stewardship Framework with Index” as internationally recognized intellectual public goods, which will provide a truly useful guidance for leaders across the spheres of business, policy-making, digital, finance, and civil society to steward the Earth as our global commons. It consists of in-depth study on the global commons concept, science-based scenario pathways to a sustainable human society within the planetary boundaries through key socio-economic system transformations, and the structured index to measure and compare each country’s contribution to the Global Commons Stewardship. The Framework will also take a full account of multiple repercussions between cyberspace and physical space and explore the role of cyberspace in stewarding the global commons.

Another major theme in the initial stage is to promote system transformation in a few specific socio-economic systems (or sub-systems), i.e., global commons in practice. The circular economy and the food system transformation are currently prioritized due to their impacts and urgency to the global commons agenda. It will be pursued through multi-stakeholder coalitions, which are increasingly recognized as an effective way to govern the global commons by bringing actors across business, policy-making and civil society together under shared goals and agreed action plans with real accountability.

The Center for Global Commons is hosted under IFI (Institute for Future Initiatives) of the University of Tokyo and led by Prof. Naoko Ishii as inaugurating director.