Tweet
The second meeting of the Hyper-Kamiokande Experiment Financial Forum (HKFF) in which foreign agency representatives gathered to engage in discussions with host organizations and project members, was held at Faculty of Science Bldg. 4, Hongo Campus, The University of Tokyo on June 27th, 2019. Seed funding for Hyper-Kamiokande (HK) has already been allocated for the current Japanese fiscal year, and 12 countries, including Japan, expressed interest in the project. 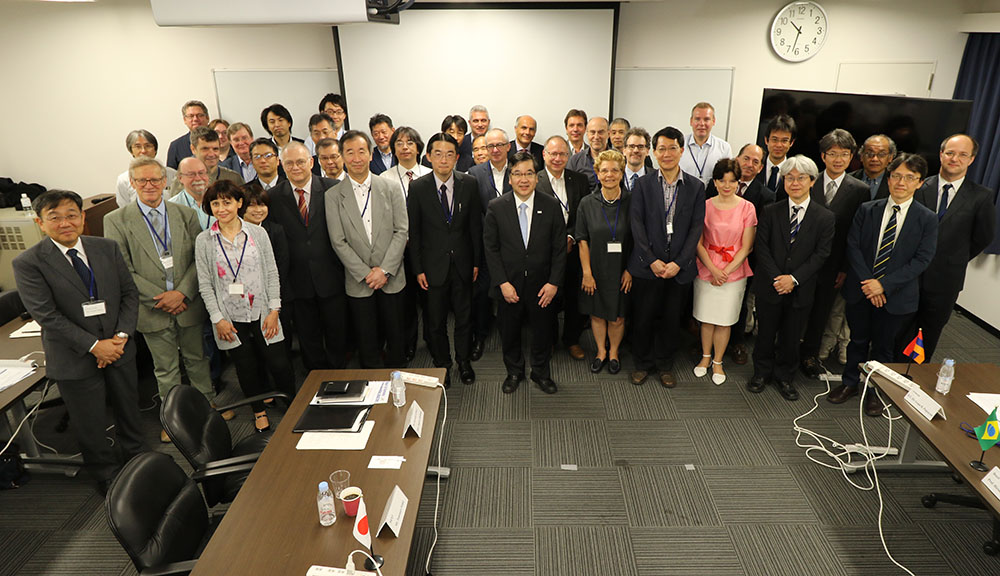 About 45 participants attended the second meeting of HKFF

Hyper-Kamiokande (HK), to be constructed in Kamioka, Hida City, Gifu Prefecture, is a new world-leading international scientific research project and aims to start its operation in the second half of the 2020s. The HK detector is planned to have eight times larger fiducial mass than its predecessor detector, Super-Kamiokande, and is equipped with newly developed high-sensitivity photosensors. The aim of HK is to elucidate the Grand Unified Theory and the history of the evolution of the universe through an investigation of proton decay and CP violation (the difference between neutrinos and antineutrinos), as well as the observation of neutrinos from supernova explosions. 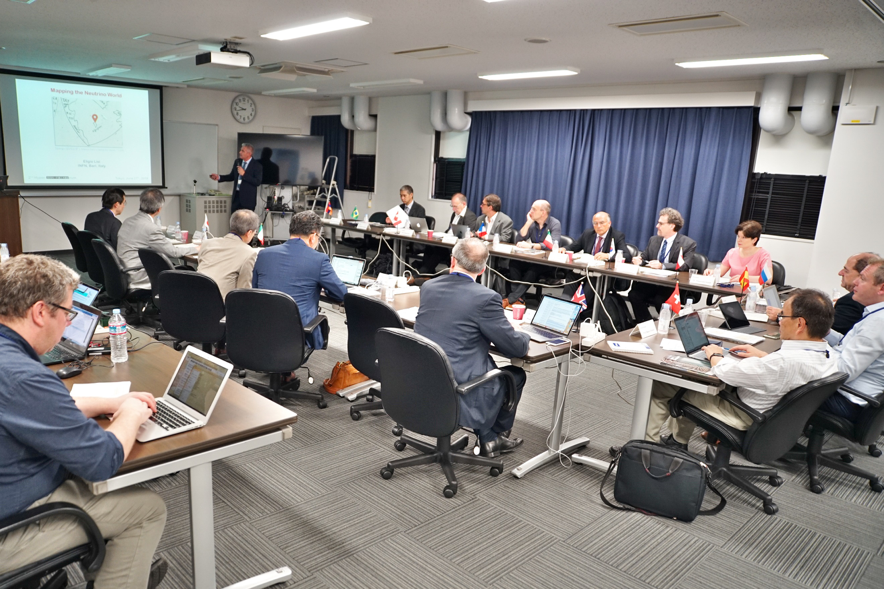 In the meeting, Prof. Takaaki Kajita, the director of both the Institute for Cosmic Ray Research (ICRR) and the Next-Generation Neutrino Science Organization (NNSO), made an opening address saying, “In order to realize HK and make it successful, solid international collaboration is essential. We’d like to ask each country to present their EOI (Expression of Interest) and hope we can discuss future strategies for realizing the HK project.” After that, Prof. Eligio Lisi of the National Institute for Nuclear Physics (INFN) - Bari gave a special lecture on the importance of neutrino research with the title of “Mapping the Neutrino World.” 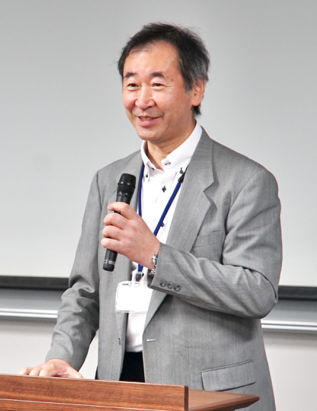 Prof. Kajita at the opening address

Mr. Tomonori Nishii, director of the Scientific Research Institute Division in the Ministry of Education, Culture, Sports, Science and Technology (MEXT) said, “MEXT recognizes the importance of the scientific significance of the Hyper-Kamiokande Project, as well as the intensity of international competition with other countries. Based on the results of the ongoing feasibility study, MEXT intends to provide the necessary support from a strategic and long term perspective.” Also, the president of the University of Tokyo, Makoto Gonokami, commented, “Working together with MEXT, we are making every effort to secure sufficient funding.” 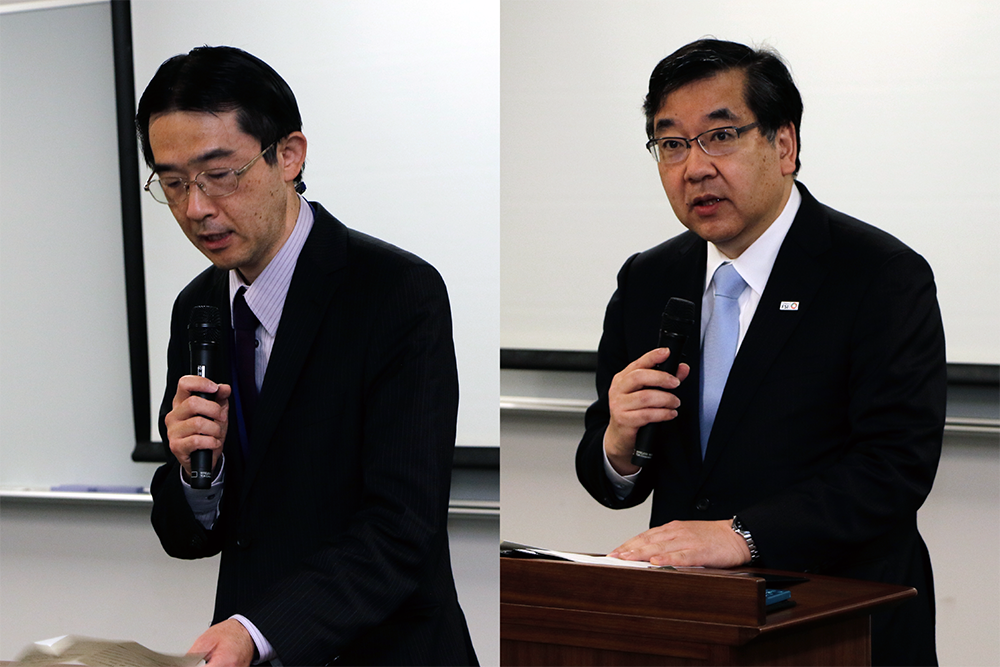 Mr. Nishii from MEXT and President Gonokami making a speech at the 2nd HKFF

Prof. Toshinori Mori from the International Center for Elementary Particle Physics (ICEPP), the University of Tokyo, who is the chair of the HK Advisory Committee (HKAC), presented outcomes of the Committee meeting held on June 25-26, 2019.
Preliminary observations of the HKAC include the following points:
Twelve countries including Japan express contributions

After the briefing on Japanese contributions to HK infrastructure, each representative from Brazil, Canada, France, Italy, South Korea, Poland, Russia, Spain, Sweden, Switzerland, and the UK make a presentation on their EOI. Proposed contributions include development and production of components of the HK detector such as high-performance photosensors and their covers, electronics, and data acquisition system, computing systems, calibration system, geomagnetism compensation coil, as well as upgrades and construction of a near detector system and beamline in the J-PARC site. HKFF discussed a summary of the second meeting before closing.

Participants make a visit to J-PARC 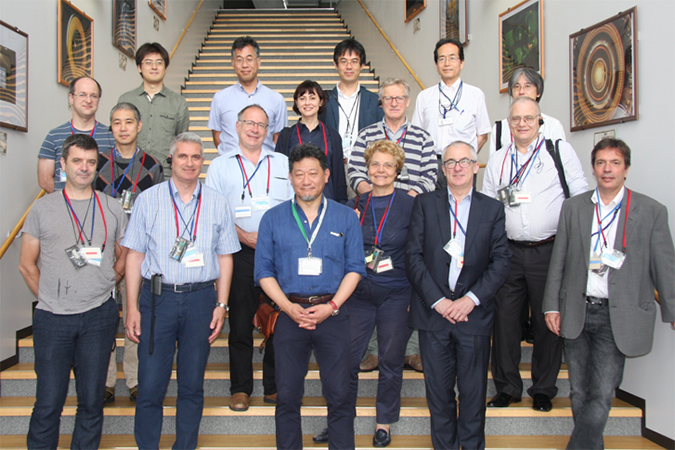 Participants of a lab tour at J-PARC

On June 28th, about 10 participants visited the J-PARC accelerator facility in Tokai Village, Ibaraki Prefecture, which will be used to produce the neutrino beam for the HK project. After the introduction given by Prof. Saito, the director of J-PARC Center, they toured the accelerators including the 30 GeV Main Ring (MR) which provides the high intensity proton beam for neutrino beam production, Neutrino Facility, Hadron Experimental Facility, and Materials and Life Science Experimental Facility (MLF), where they received explanations on the research goals and content from researchers of each facility.