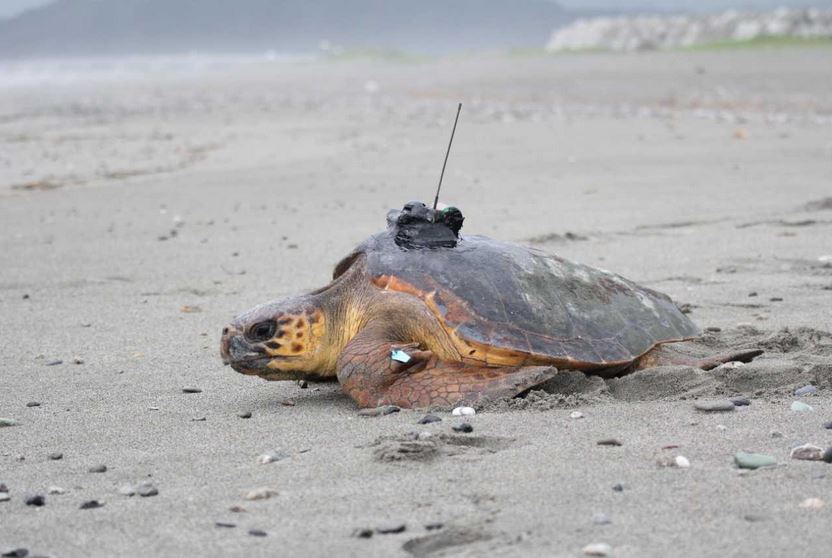 Members of Katsufumi Sato’s laboratory, including doctoral student Chihiro Kinoshita, use satellite-connected data-logging devices like the black box on this juvenile Pacific loggerhead sea turtle to better understand animal behavior and ecology. The small blue tag on the turtle’s front fin is a simple ID tag that should remain on the turtle even after the data-logger falls off. Kinoshita has previously received crowdfunding support to pay for research expenses like these ID tags and rental cars to transport turtles. © Chihiro Kinoshita CC-BY.

The research project was led by Chihiro Kinoshita, a doctoral student in the lab of Professor Katsufumi Sato in the Atmosphere and Ocean Research Institute. Her work builds on earlier observations of juvenile loggerhead turtles from the western North Pacific performing active, short dives all year, while Mediterranean turtles of the same age and species switch to inactive, long dives over winter.

"These new results suggest that Mediterranean and North Pacific turtles would not enjoy trading places in winter. The discovery of likely genetic differences between turtle populations is very exciting," said Kinoshita. 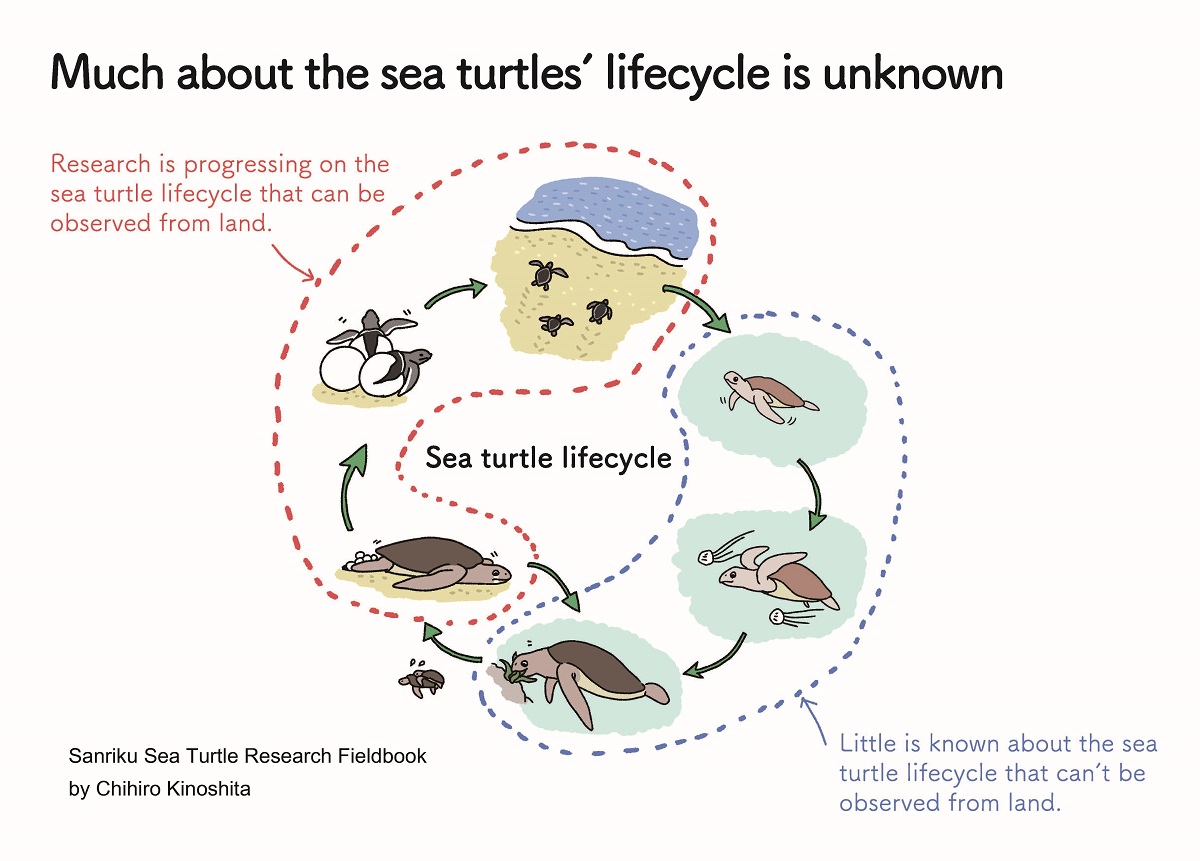 Bio-logging research techniques are helping discover parts of the sea turtle life cycle that cannot be observed from land. This image is part of the Sanriku Sea Turtle Research Fieldbook that Kinoshita created to introduce the research projects to the fishers and community members of the Sanriku Coast where the turtles are usually collected.
© Chihiro Kinoshita CC-BY-NC

Turtles in the western North Pacific can eat all year round as converging ocean currents carry fresh nutrients and food to the area. Those Pacific turtles spend more energy, actively diving for food and continuing to gain weight and grow over winter. Nutrients in the Mediterranean are scarce in winter, so turtles become inactive, sitting and waiting until spring for their next meal.

Kinoshita worked with 13 juvenile Pacific loggerhead turtles in laboratory experiments between June 2016 and September 2017. Turtles lived in water that was 15, 20, or 25 degrees Celsius (59, 68, or 77 degrees Fahrenheit) and researchers measured the oxygen consumption rate from their exhaled breath, a common indicator of metabolic rate.

Kinoshita also analyzed the turtles' underwater dives to interpret their activity levels and infer their metabolic rates. Before Kinoshita joined the lab in 2015, other lab members collected the dive information from 2009 to 2014 using data loggers. These small recording devices are essential tools for the Sato laboratory's expertise in bio-logging.

"A very good aspect of data loggers is that we can collect and store numerical data about animal behavior long-term, and then reanalyze it in multiple research projects over many years," said Kinoshita.

Turtle metabolism can tell researchers much about population genetics and reptile biology, and may also contribute to conservation strategies.

"Now during research trips, scientists see different species of sea turtles than we saw in earlier years,” said Kinoshita. “Turtle populations move to find their preferred habitats, maybe based in part on their metabolism, as climate change alters water temperatures.”

Kinoshita plans to also study green sea turtles and their metabolism. Green sea turtles are interesting research subjects because they have populations around the world and are a mainly herbivorous (vegetarian) species of sea turtle.

Turtles used in the Sato laboratory experiments are captured as by-catch by local fishing companies along the Sanriku Coast, near the University of Tokyo International Coastal Research Center in Iwate Prefecture, about 570 km (354 miles) north of Tokyo. Fishers alert researchers to collect turtles whenever one appears. Researchers take measurements and sometimes attach bio-logging devices before returning turtles to the sea. 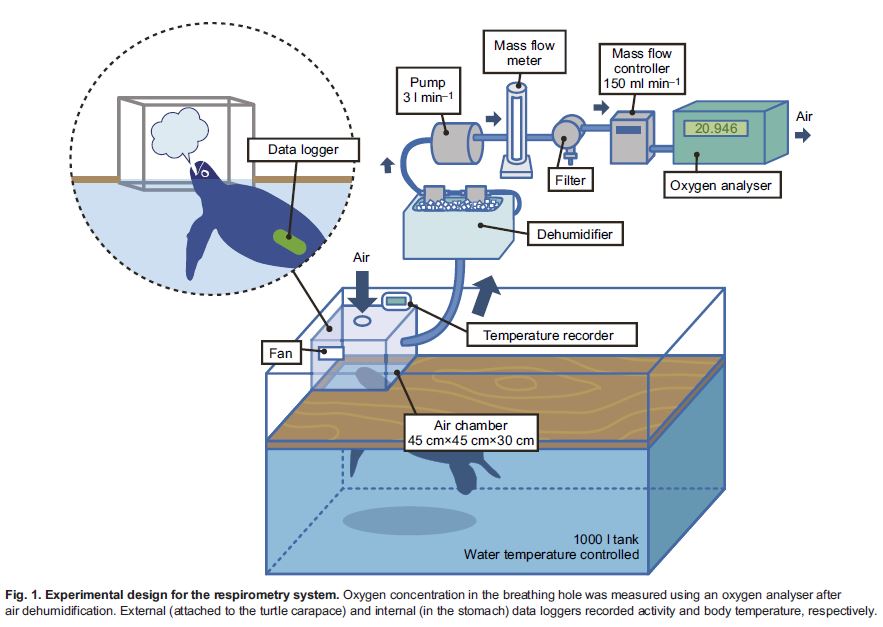