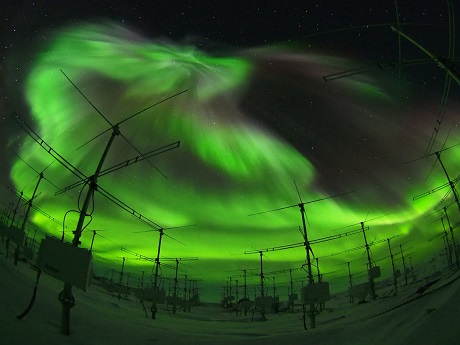 Green aurora, or Southern Lights, are bright behind the PANSY radar antenna in 2011. Image by JARE 54th Winter CC-BY-NC-ND

Japan and much of the planet sweltered through prolonged heat waves in 2018. The heat could have been more intense if not for the deflection of ultraviolet radiation provided by Earth’s ozone, a special layer of the atmosphere that is protected by the Montreal Protocol adopted in 1987. The United Nations Environment Program leads annual celebrations of this landmark agreement to stop production of chemicals that create the ozone hole, on September 16, International Day for the Preservation of the Ozone Layer.

The University of Tokyo is joining Ozone Day by showcasing the work of Professor Kaoru Sato and the PANSY radar project. Increased understanding of clouds at Earth’s poles and vertical movements of air around the world may lead to predictions of seasonal changes of the ozone hole and better predictions of seasonal weather trends.

Different molecules collect at different heights above Earth’s surface, partially due to density. The ozone layer is identified by a high concentration of ozone, a molecule made of three oxygen atoms bound together, denoted by the chemical formula O3. These images from the U.S. space agency, NASA, show the density of ozone in the atmosphere in September 2002 and November 2014, as examples. The blue color represents areas with lower concentrations of ozone, commonly known as the ozone hole.

The ozone hole forms above Antarctica during the Southern Hemisphere’s early spring and disappears in late spring every year. Seasonal temperature differences associated with the strength of the Antarctic vortex change the polar night jet winds and cloud cover. Different types of scientific equipment monitor the movement of air to better understand these winds and collect the data needed for atmospheric scientists to develop models that predict where the ozone hole might move. The PANSY radar system is one such piece of scientific equipment. 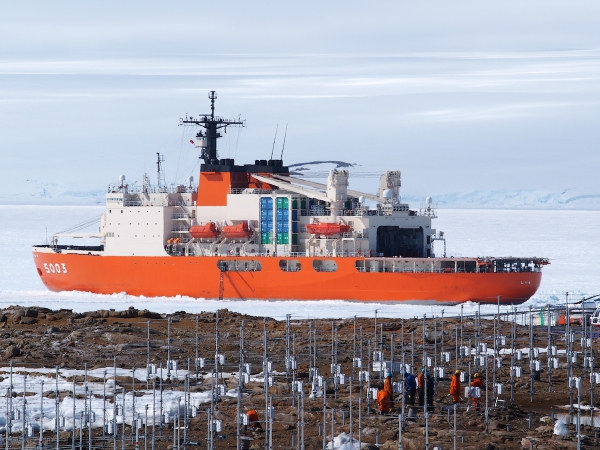 Multiple nations have scientific outposts near the North and South poles. One of Japan’s polar research bases is Syowa Station (昭和基地 Shōwa Kichi) on East Ongul Island at 69 degrees south latitude. In 2011, researchers began three summers of construction to build the Program of the Antarctic Syowa Mesosphere-Stratosphere-Troposphere/Incoherent Scatter (PANSY) radar.

“PANSY is the largest of this type of radar in Antarctica. Building it allowed us to get a new, very large source of data about what happens in the atmosphere,” says Professor Kaoru Sato, leader of the project and member of the Graduate School of Science at the University of Tokyo. Sato was the person who, in 1999, first suggested building a radar system in Antarctica. It became the project that has stayed with her throughout her career.

PANSY is composed of 1,045 individual Yagi-Uda-type antennas in a roughly circular area with a diameter of 300 meters (328 yards). Each antenna sits in a hole one meter (3.3 feet) deep and stretches three meters (9.84 feet) above ground, designed to withstand wind speeds of 234 kilometers per hour (145 miles per hour).

“These antennas are traditionally about 50 kg (110 pounds) each. To build PANSY, we researchers – not professional technicians, and without heavy machinery – needed to carry and set up each antenna ourselves. At the end of the redesign process, I had the final antenna weight down to 12.6 kg (27.7 pounds) each,” recalls Sato. 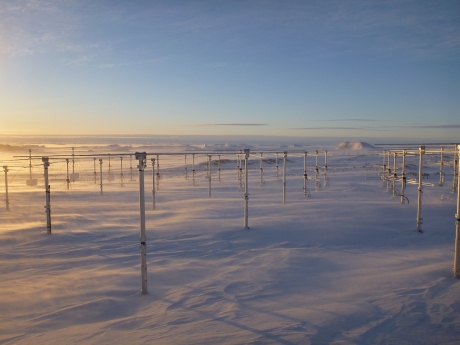 Each PANSY antenna senses movements of air from 1.5 kilometers up to 100 kilometers (1 mile up to 62 miles) and plasma gas parameters from 100 kilometers up to 500 kilometers (62 miles up to 310 miles) above sea level. Researchers use the data to make graphs of wind and electron densities. The PANSY radar detects air moving horizontally and vertically, giving researchers a three-dimensional understanding of atmospheric dynamics. Current climate models make unreliable predictions of when the ozone hole will dissipate because they lack this 3D understanding of the wind.

“Only a big radar system like this is powerful enough to measure the vertical movement of wind in the atmosphere,” explains Sato. 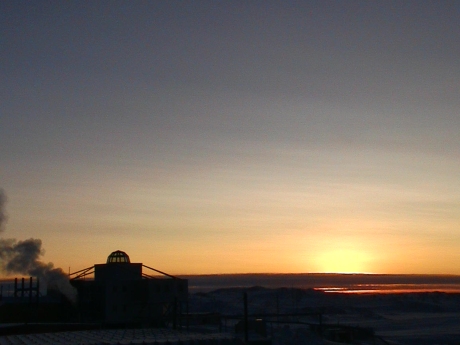 A unique type of cloud 20 kilometers (12 miles) above Earth’s surface often creates beautiful orange or pink skies during the Antarctic winter when the sun never truly rises above the horizon. These polar stratospheric clouds are a major contributor to the ozone hole. The clouds provide a surface for the chemical reactions that create molecules that break down ozone. When the Southern Hemisphere summer arrives, the increased temperatures melt away the clouds and the polar night jet winds that constrain the mass of low-ozone air – the ozone hole – disappear. The low-ozone air then mixes in with the rest of the atmosphere around the globe.

One of Sato’s goals for PANSY is to predict the development and movement of polar stratospheric clouds and therefore anticipate the size and location of the annual ozone hole. 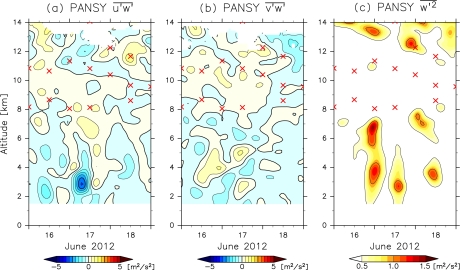 The air in Earth’s atmosphere is dynamic, moving horizontally and vertically. Although PANSY can collect data from much higher up, Sato’s research interests are primarily in the area 1.5 kilometers to 22 kilometers (1 mile to 14 miles) above Syowa Station, which includes the troposphere, stratosphere (where the ozone layer resides), and mesosphere layers of the atmosphere. Within that range, air movements called atmospheric gravity waves sometimes cause cap clouds, which look like discs covering the top of mountains, or clouds that look like ripples or rough surf in the sky. As it blows horizontally, wind will sometimes be pushed up by a mountain and then move back down again due to buoyancy.

Continued up-down movements like this are the gravity waves and cause circulation of the air between different latitudes of the atmosphere. This circulation interests Sato and is not currently understood well enough to be accurately included in climate and weather prediction models. PANSY is able to record movements of gravity waves with periods of 8 minutes to 13 hours, which gives researchers a detailed understanding of atmospheric circulation. 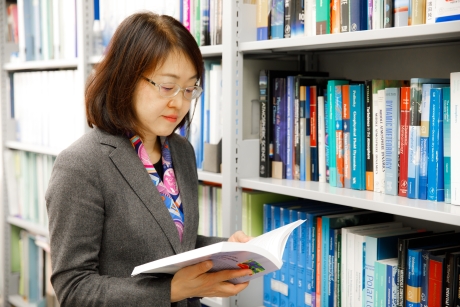 “Better understanding of global atmospheric winds means that we could predict when the ozone hole will break up every spring, meaning we could warn people when to take extra precautions to avoid UV rays as the ozone-depleted air moves towards them,” says Sato.

The radar data that Sato and other researchers are analyzing now could eventually create more comprehensive models of global climate and weather. Sato imagines better seasonal weather predictions could include warnings weeks in advance of expected heavy rain or extreme heat. “Governments could know to be better prepared for floods or shop owners could know when to stock more ice cream before a heat wave,” imagines Sato.

Sato’s next application of the PANSY system started in 2016 when she coordinated two weeks of observations of the mesosphere by about 30 researchers from eight countries and more than 15 radar systems around the world. The observations were carried out in anticipation of an expected sudden stratospheric warming event in the Arctic. Researchers suspect that the effects of that temperature increase in the far north are transmitted around the globe via gravity waves. The simultaneous observations and data sharing were repeated in 2017 and 2018, and will hopefully continue.

"It is definitely necessary to have continuous global, three-dimensional monitoring of ozone and other chemical species related to ozone chemistry if we are to continue protecting the ozone layer. It is also important to continuously nurture scientists who investigate the fundamental properties of nature so that they can locate the cause quickly when any abnormality in the ozone layer occurs," says Sato.