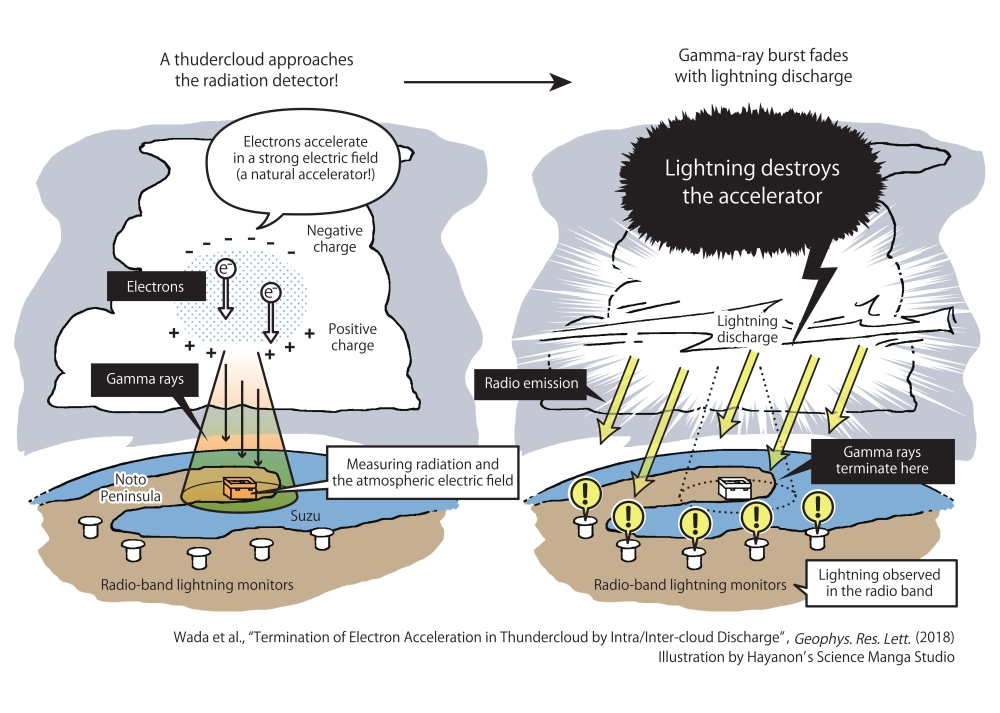 An international research group including University of Tokyo researchers revealed that the electron-acceleration mechanism inside a thundercloud was destroyed by an electrical discharge of lightning in the cloud.

In studies conducted in recent years, using radiation measurements taken from the air, on mountaintops, and on the ground, scientists have detected bursts of gamma rays—short-wavelength, high-energy electromagnetic radiation—coming from thunderclouds, lasting for a few minutes to several-dozen minutes. Electrons accelerated and multiplied by strong electric fields in thunderclouds are known to emit gamma-ray bursts known as Bremsstrahlung gamma rays; but how these gamma-ray bursts emerge, grow, disappear, and sustain the electron-acceleration mechanism for up to several-dozen minutes is still poorly understood.

In the current study, the research group led by graduate student Yuuki Wada at the Graduate School of Science at the University of Tokyo used high-energy radiation, atmospheric electric-field, and low-frequency radio measurements to observe winter thunderstorms in the Noto Peninsula, a piece of land that juts into the Sea of Japan.

On February 11, 2017, when thunderclouds were approaching the group's observation site at the Kanazawa University Noto Atmospheric Monitoring Observatory in the city of Suzu, Ishikawa Prefecture, in central Japan, high-energy radiation monitors detected a gamma-ray burst lasting 75 seconds that abruptly terminated with a lightning flash. A low-frequency lightning mapping network, consisting of five radio receivers installed along Toyama Bay, just south of the observatory, detected the eastward development of a lightning discharge in the thundercloud. When the lightning's path crossed a point 700 meters to the southeast of the observation site, the time of passage through there matches that of when the gamma-ray burst terminated. This shows that the lightning destroyed the electron-acceleration mechanism of the cloud above the observation site and terminated its gamma-ray burst.

"I'm glad to publish this work in collaboration with researchers working on high-energy radiation, atmospheric electric-field, and radio observations. I'm looking forward to further collaborative research and encountering unexpected phenomena in Japanese winter thunderstorms," says Wada. He continues, "Termination events of the gamma-ray bursts are detected only once several years. We are very lucky that such a serendipitous event was detected by the collaborative campaign, which realized for the first time simultaneous observations of radiation, electric-field, and radio measurements."

This study is the result of an international collaboration with RIKEN, Kyoto University, Tokyo Gakugei University, Kobe City College of Technology, Kindai University, Nagoya University, Kanazawa University, and the Japan Atomic Energy Agency in Japan, and the Los Alamos National Laboratory and the University of California, Santa Cruz, in the U.S.