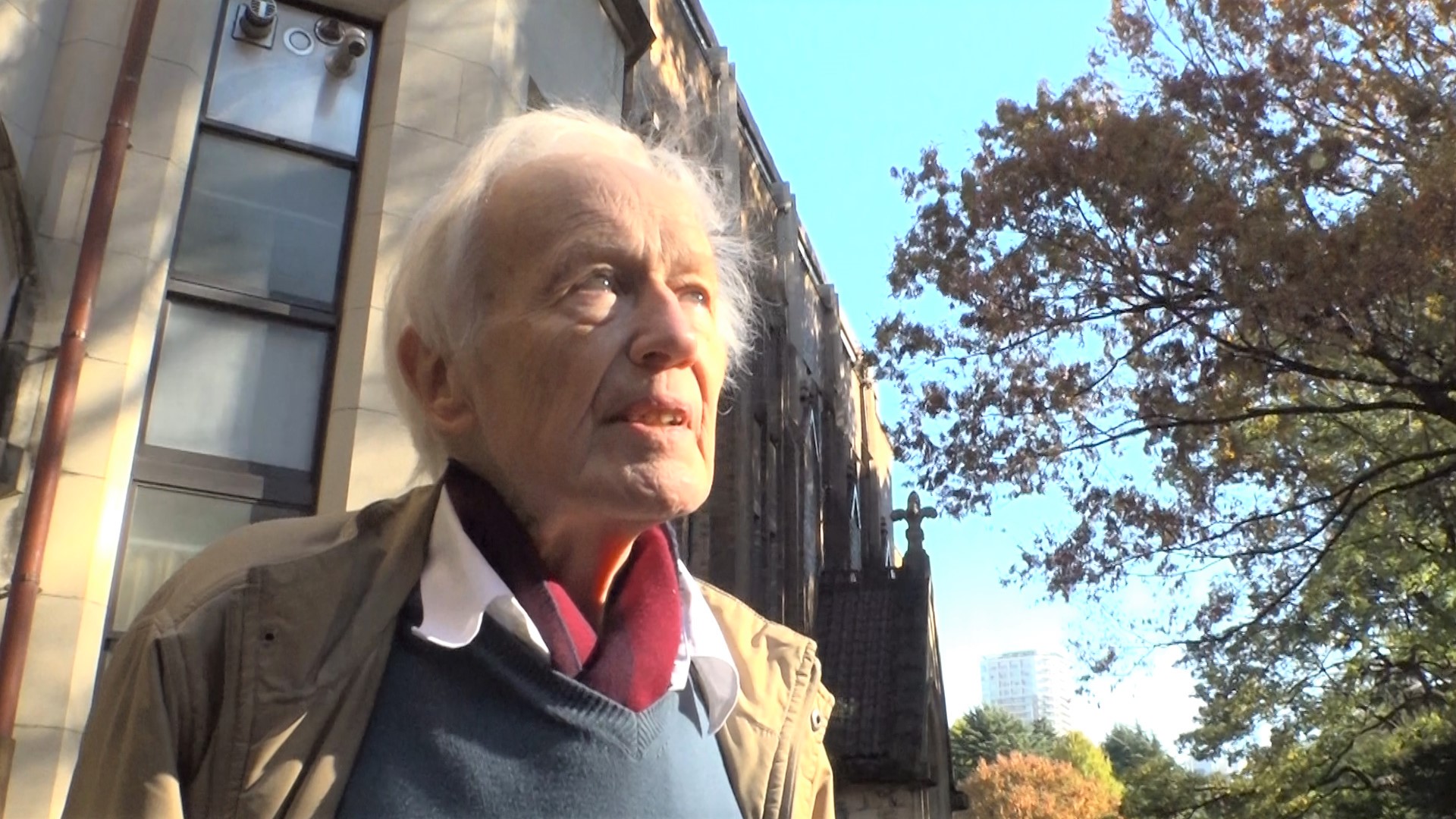 University of Illinois Professor Emeritus Sir Anthony J. Leggett is seen strolling the University of Tokyo's Hongo Campus in a recently aired TV documentary. © The Open University of Japan (page top and above).

Sir Anthony J. Leggett is a world-famous physicist. The London-born professor emeritus at the University of Illinois Urbana-Champaign won a Nobel Prize in physics in 2003 for his pioneering work to explain a phenomenon called the superfluidity of helium-3, a theory that could be applied to everything from maglev trains to quantum computing to research on the origin of the universe.

The Oxford graduate’s half-century ties with Japanese scientists, including many at the University of Tokyo, might be less known. A documentary TV program produced by the Open University of Japan and aired recently on a Broadcasting Satellite channel explores the warm and sincere friendship Leggett has nurtured with physicists at UTokyo, as well as the profound impact he continues to have on young scientists in Japan.

The Open University of Japan, which invited Leggett to Japan last fall to shoot the 45-minute program, takes a trip with him to Kyoto, where he spent a year in the 1960s as a postdoc at the Department of Physics at Kyoto University’s Faculty of Science, and where his relationship with Japan all began. Back then, the young Englishman lived in a standard Japanese apartment with local students, acquiring a level of Japanese proficiency that amazed his student friends.

It was during this time that he also penned an article, “Notes on the Writing of Scientific English for Japanese Physicists,” which has been read by many scientists in Japan to this day.

The article, published in a Japanese physics journal, for the first time explained in detail how Japanese physicists should improve their English-writing skills by changing the structure in which their thoughts are presented and making their language unambiguous in papers, so they can make their research better understood by native English-speaking colleagues.

The TV program then covers Leggett’s interaction with UTokyo’s Graduate School of Science/Faculty of Science, where he spent time as a special lecturer in 1973-1974. It was a crucial stage of his career, as it was only a year after he published the Nobel-winning theory on superfluid helium-3, where he explained how helium-3, a stable isotope of the element helium slightly lighter than the more common helium-4, becomes a superconductor at extremely low temperatures.

There, he gave a series of lectures — all in Japanese — on his cutting-edge work about superfluidity, wowing scores of budding physicists at UTokyo.

The program also features then-UTokyo Physics Professor Hiroshi Fukuyama, who was one of the many physicists in Japan influenced not only by Leggett’s stellar academic work but also the sincerity with which he interacted with researchers. Fukuyama, who specializes in low-temperature physics as Leggett does, invited the Nobel laureate for special, monthlong lecture series at UTokyo for three years from 2011, in cooperation with Professor Masahito Ueda, a theoretical physicist also at UTokyo. Fukuyama wanted to create opportunities for young physicists to be inspired just like those fortunate enough to listen to the famous 1973 lectures.

UTokyo caught up again with Leggett in February 2019, when it appointed him as honorary director of Tokyo College set up that month. Tokyo College is a UTokyo institution aimed at identifying issues and solutions for humanity in 2050. Leggett gave a lecture at Tokyo College in June 2019. Then in fall that year, during another visit to the university, the professor discussed the importance of international, cross-disciplinary exchanges with Tokyo College Director Masashi Haneda, who is concurrently executive director and vice president at UTokyo.

Leggett concludes the program with a piece of sage advice for young scientists in Japan, encouraging them to keep following their own curiosity and not worry too much about whether the question they are pursuing has already been answered. He also tells them to keep records of the work they have done, if they have done a good piece of work and done it honestly, even if it is not immediately useful.

And lastly, he advises future scientists, as he himself has demonstrated through his lifelong exchange with UTokyo researchers, that they should take teaching as seriously as their research.

The program, "Japan seen through Professor Leggett — A cultural exchange by a Nobel Prize-winning scientist," will be re-broadcast on BS Channel 231 on April 18, at 8:15 p.m. For more information, visit the Open University of Japan website at: https://bangumi.ouj.ac.jp/bslife/detail/70201051.html (in Japanese).