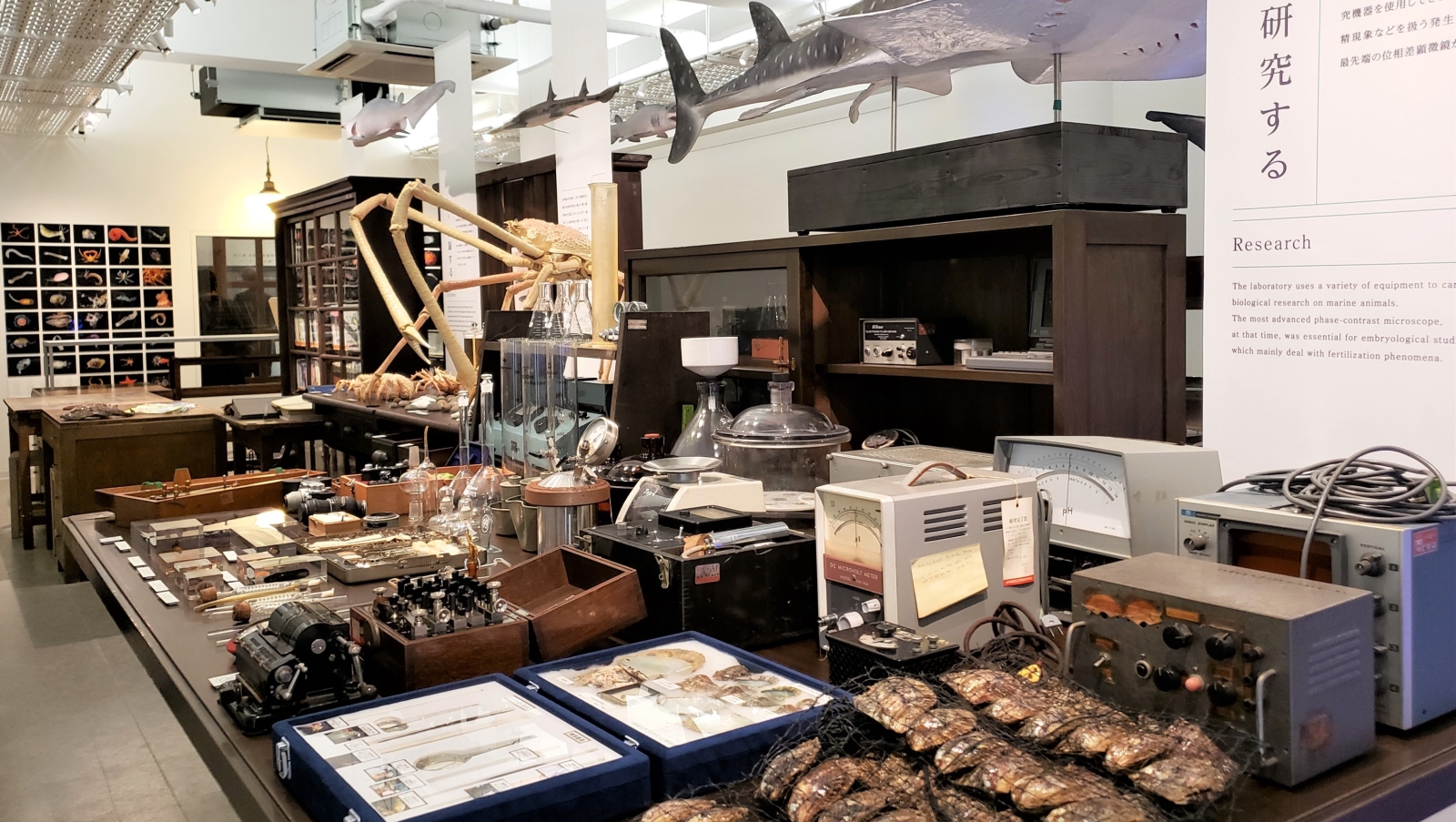 UTokyo's marine biological station in the city of Miura, Kanagawa Prefecture, on Aug. 7, 2020, unveiled a new building aimed at showcasing the area’s abundant marine life and enhancing collaboration with local and industrial partners.

The long-awaited completion of the Education Building at the Misaki Marine Biological Station (MMBS) follows the closure and demolition of two historical buildings at the Graduate School of Science-affiliated facility, which boasts a 134-year history as the nation’s first marine station. It’s also one of the world’s oldest.

The Aquarium and the Memorial Hall were built in the 1930s under the design direction of Yoshikazu Uchida (1885-1972), a former UTokyo president and architect known for his elegant “Uchida Gothic” structures.

Overlooking Sagami Bay, the buildings were long symbols of the MMBS’ standing as a top marine research facility in fields spanning zoology, taxonomy, embryology and physiology. The Memorial Hall hosted generations of UTokyo students for hands-on training, and domestic and international scientists for joint research and collaboration. Many local citizens meanwhile have fond memories of visiting the Aquarium and enjoying exhibits, including rare species collected from the area’s deep sea, before it was closed in 1970.

But decades of wear and tear, especially exposure to rain mixed with salt particles in the air from the sea, rendered the oceanfront buildings structurally unsound and irreparable, leading to their demolition by the end of March 2020.

The new two-story building is aimed at passing on the traditions of the facility and expanding them further. The first-floor exhibition room named Marine Biology Showcase exhibits specimens and artifacts used and stored in the old buildings.

Above the room’s entrance doors are the metal letters “MMBS,” which used to adorn the Memorial Hall. An explanatory panel inside is decorated with what used to be the frame of a water tank at the Aquarium.

The room is divided in five areas, leading visitors through the evolution of the facility. Exhibits include the area’s maps and admission tickets to the old Aquarium. Specimens of rare creatures, such as a white sponge known as Venus’ flower basket and captured from the sea by legendary sample collector Kumakichi Aoki (1864-1940), are shown. The work by Aoki, nicknamed “Kuma-san,” led to countless discoveries of new species.

The room also has a mini aquarium, where live marine creatures can be observed up close. It also displays items related to the ongoing Miura pearl culturing project, started by former MMBS Director and UTokyo Professor Emeritus Koji Akasaka. The project, now being undertaken by the facility's technical staff in collaboration with local high schools, is aimed at promoting marine education and revitalizing local industries.

Furthermore, the building houses a water tank room, where samples collected from the bay can be kept for research, and offices for guest researchers.

At a ceremony celebrating the completion of the new building, a tiepin adorned with a pearl harvested at the MMBS was presented to the guests as a token of appreciation.

MMBS Director Yoshitaka Oka expressed hope that the building would serve as a hub of collaboration with researchers, as well as local and industrial supporters. Oka also said that he is preparing to open the exhibition room to the public.

Hiroo Fukuda, UTokyo executive vice president and a biologist himself, said he hopes that the facility will further contribute to the development of marine biology research and education in Miura and beyond.

“The ocean is the cradle of life,” Fukuda said. “It breeds new life and nurtures diverse creatures. I hope the new Education Building will help unravel the mysteries of the ocean and spark interest in marine biology across the world. And I dream of the day when this area will produce a Nobel-winning scientist.”