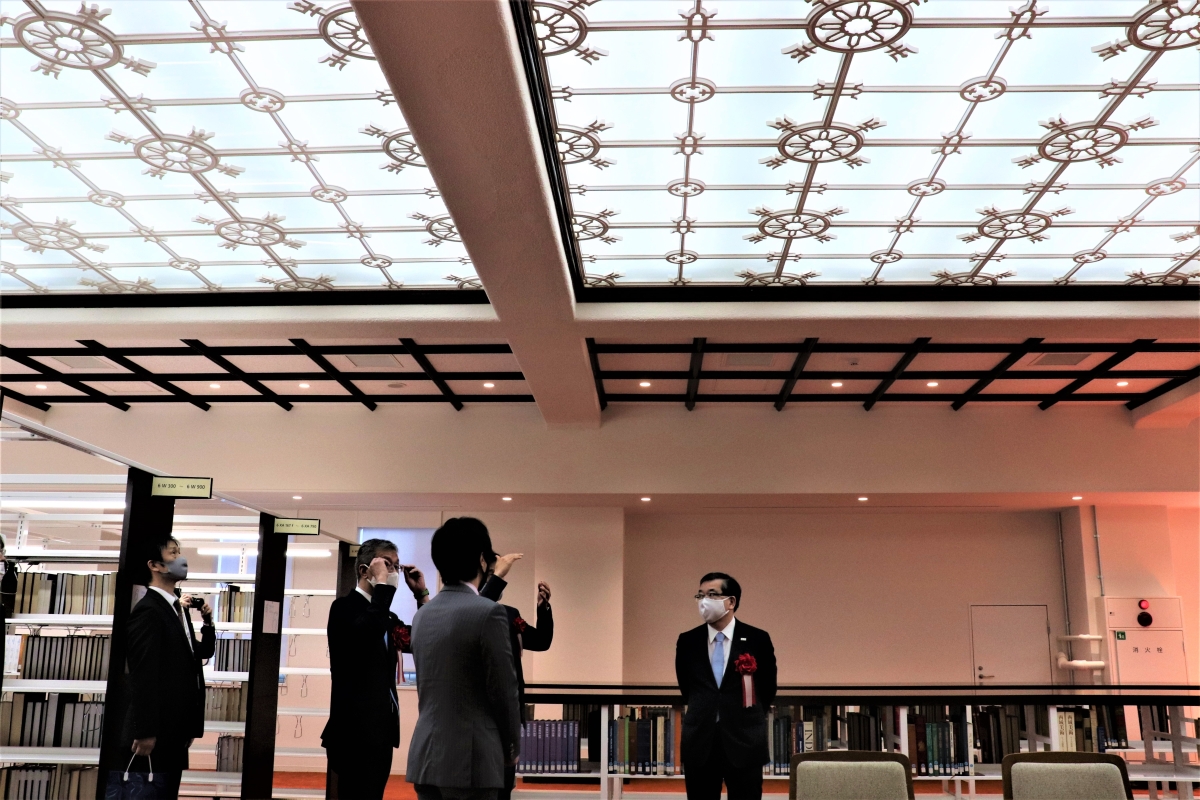 UTokyo executives tour the Asian Research Library on the 4th floor of the General Library on Nov. 26, 2020.

UTokyo’s General Library on the Hongo Campus on Nov. 26, 2020, held a ceremony to celebrate the completion of a renovation project that included construction of an annex, upgrades of the main building and the opening of the Asian Research Library.

Dubbed the New Library Project, the renovation work, spanning 10 years including the planning stages, was initiated to efficiently manage 1.2 million volumes held at the General Library. Its aim was also for the library not only pass on its long history and tradition but also to support research and education of the digital era.

In the main building, the Memorial Room on the first floor and the third-floor hall has restored the beautiful design originally introduced when the current library building was built in 1928. The annex features 40-meter-deep underground automated storage with the capacity to hold some 3 million books. The annex also features the Library Plaza, which was completed in 2017 and provides space for study and events.

UTokyo President Makoto Gonokami said in a ceremony that renovation of the library is one of the most memorable events and reforms he has been involved in as president, partly because the construction work went into full gear just as he assumed his six-year term in April 2015.

He recalled the days when hundreds of concrete mixers entered the Hongo Campus, which made him extremely nervous about their impact on road congestion and ambulance services at the University Hospital.

“Fortunately the construction work was safely completed. I hope the General Library will continue to play its role to serve as the foundation for diversity of learning and contribute to nurture knowledge professionals,” Gonokami said.

The Asian Research Library, which started operating on Oct. 1, 2020, consolidates a large number of top-of-the-line Asia-related research materials that had been scattered throughout the university, providing a world-class environment for Asian research.

Tomoji Onozuka, librarian of the Asian Research Library, said that it will be the first among the university’s libraries to have a research function.

From the coming academic year, the library will have “subject librarians” with advanced education and expertise in particular academic disciplines, Onozuka said, noting that the library hopes to help make such specialists a fixture in other libraries in Japan.

The library has a history nearly as long as UTokyo’s; the university, established in 1877, constructed its first independent library building in 1892. But the building and much of its collection were destroyed by fire in the 1923 Great Kanto Earthquake. The current building was built in 1928 with a donation from American philanthropist John D. Rockefeller Jr.

Teruo Fujii, executive vice president in charge of social relations and the UTokyo Foundation, said donations from both in and out of Japan over the years have laid the foundation of the library. He also expressed hope on the active use of seven “Project Box” rooms in the library. The new rooms, of varying sizes, are intended for discussions and group work.

“Currently, due to the coronavirus outbreak, it is difficult to organize in-person events, but when the situation improves, I hope these new spaces will be utilized to communicate outcomes of our research and education,” Fujii said.